The European Commission brokered a “global political solution” with Hungary over its controversial Russia-backed nuclear power station rather than escalate a fight amid already fraught relations with Budapest, according to internal documents obtained by an MEP and reviewed by POLITICO.

More than 200 pages of Commission memos, emails and meetings minutes from 2016 show that Commission officials expressed serious doubts about Hungary’s numerous attempts to justify awarding the contract to build the €12 billion Paks II nuclear project to the Kremlin-owned Rosatom without opening up the project for bids.

The documents show the Commission ultimately caved for political reasons when it dropped its infringement case in November 2016 over Hungary’s decision to skip a public tender two years prior. EU law requires competitive bidding for such projects.

The documents were obtained by Hungarian Green MEP Benedek Jávor through an access to documents request under EU transparency rules. It took nearly a year for the Commission to accede to most of his request, and the documents released have all been shared with POLITICO.

“You cannot cross a red light and promise the police that you will stop at the next light, so it’s OK” — Benedek Jávor, Hungarian Green MEP

“It was a political decision, and then they tried to construct a reason ex-post. This is backed by these documents,” said Jávor, who opposed the Paks project. He said it was “unique” for the Commission to approve a decision that went against so many of Brussels’ priorities.

Commission spokeswoman Lucia Caudet disagreed that the decision was crafted to match political needs, saying that considering new argumentsduring an infringement procedure like this one “is not exceptional.”

“Any conspiracy theories or allegations of undue interference are unfounded,” Caudet said Tuesday.

Yet what is clear from the documents is that Hungary’s first attempts in late 2015 and early 2016 to defend the Rosatom contract fell flat in Brussels.

If at first you don’t succeed

The Hungarian argument that finally gained traction — that Rosatom was the only nuclear technology provider that could meet Hungary’s technical needs — emerged as an apparent afterthought some two years after the project was conceived in 2014. It was only alluded to as providing “technical continuity,” in Hungary’s first letter responding to the Commission complaint in January 2016.

Even then, the argument about Rosatom’s technical exclusivity initially raised doubts in the Commission’s internal market and industry department, according to emails between staffers in the first few months of 2016.

“We stressed that the conditions to invoke this exception have been set very high by the [European Court of Justice] and that, up to now, we have not seen any sufficient justification for invoking the exception,” a February 15 email from a Commission official to colleagues in the internal market department, including a director, the deputy director-general and the director-general, reads, summarizing a February 12 meeting with Hungarian officials. 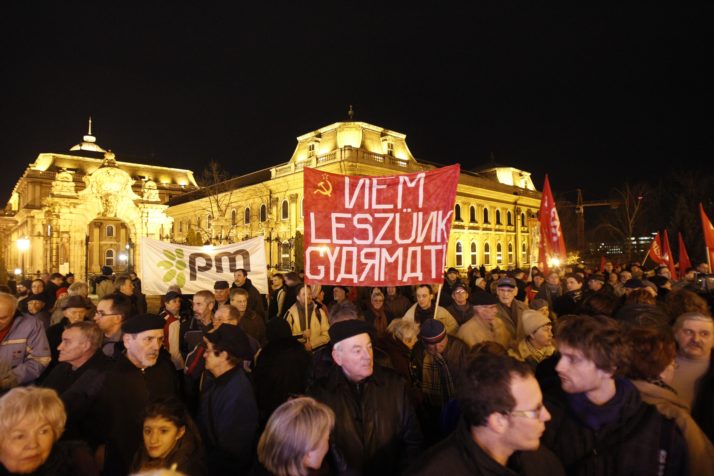 Rosatom’s U.S.-based rival Westinghouse Electric, which discussed Paks II with the Hungarian government, boosted the case against the deal, arguing it was ready to submit a competing bid.

In the end, Budapest got Brussels’ green light for the Rosatom contract and Hungary stuck with a promise to solicit bids for subcontracts for Paks II. In a bonus for the EU, the deal ensured European companies could get in on the subcontracts.

“Our respective teams have worked closely and effectively together to substantiate the applicability of the technical exemption and have elaborated such a framework which enables us to find a mutually acceptable solution regarding the Paks II nuclear power plant development project,” János Lázár, who oversees the Hungarian prime minister’s office, said in a letter to Elżbieta Bieńkowska, the internal market commissioner, on August 4, 2016.

Westinghouse disputed the claim that Rosatom had exclusive technology and argued the Commission took Budapest at its word rather than asking for the company’s views.

“We had never received any questions about technical issues or concerns after two years of intense technical exchange,” Michael Kirst, Westinghouse’s ‎vice president of strategy and external relations, said Tuesday when asked about Westinghouse’s views on the Commission’s procurement decision. Kirst called the Commission’s eventual approval of the Rosatom deal an “artificially created rationale.”

Caudet said the discussions between the Commission and Hungary followed normal infringement procedures, with “a dialogue where additional questions are asked and additional explanations are put forward.”

The Hungarian government’s international communications office said it offered “several arguments from the very beginning,” including the technical exemption. “These negotiations were part of the infringement procedure that can be considered only in its integrity, and cherry-picking items or arguments from the procedure can be misleading and inaccurate,” it said Tuesday.

Lázar’s letter to Bieńkowska marked a shift in tone between the two sides, from what Hungary described as a “discriminatory” attitude and “lack of appreciation” from the internal market department in January to what Commission officials called “a good atmosphere and spirit of cooperation” in June and July.

In one meeting, for instance, Bieńkowska’s head of cabinet Tomasz Husak walked Hungarian officials through the “main elements” they should offer, such as the level and content of the subcontracts, according to a June 9 email.

“He insisted that all these points should be addressed in a very detailed and comprehensive way in any commitment by the HU authorities,” an internal email in Bieńkowska’s department said. “This could take the form of a letter by Minister Lázár to the [commissioner].”

Hungary’s promise to abide by the Commission’s standards for the subcontracts allowed it to stick with the initial Rosatom deal.

It was an option Commission officials described to Husak as the “global political solution” in a memo in early March 2016. However, officials previously made clear on several occasions that mere subcontracting would not resolve their concerns.

Jávor sees the deal — allowing Hungary to skip one tender in exchange for holding others — as legally weak. 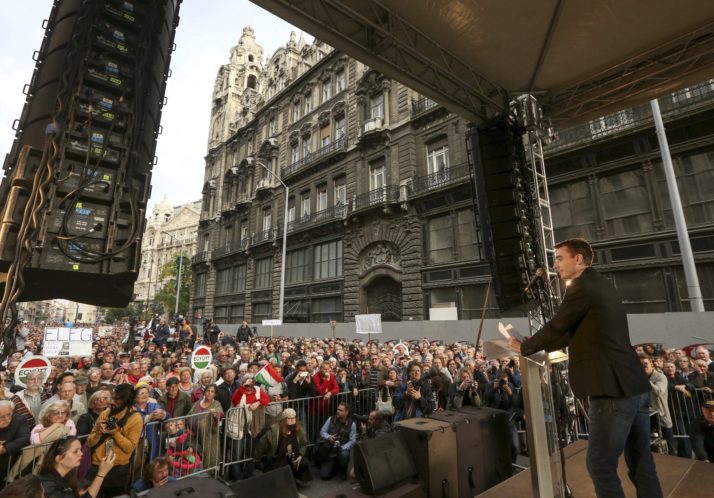 Javor, pictured in Budapest in 2016, obtained the documents through an access to documents request under EU transparency rules | Mohai Balazs/EPA

“You cannot cross a red light and promise the police that you will stop at the next light, so it’s OK,” he said. “I think it’s ridiculous.”

But hanging over the Paks talks was the broader issue of Hungary’s souring political relations with the EU.

In October 2016, Hungarian Prime Minister Viktor Orbán held a controversial referendum protesting EU policy for distributing hundreds of thousands of refugees in the bloc. Most Hungarian voters did not take part in the referendum, rendering the result — in favor of Orbán’s stance — legally invalid. But the move helped Orbán position himself at the forefront the Continent’s growing anti-establishment and Euroskeptic sentiment.

The Hungarian government, which was battling a number of other cases alleging breaches of EU law, made no secret that it considered the Paks II collaboration with Russia to be a national priority.

Hungary agreed to build Paks II with Russia through a series of agreements struck between 2013 and 2014. Moscow agreed to provide a €10 billion loan for the project, along with Rosatom’s technology, its nuclear fuel and the option for temporary waste storage.

Brussels launched its case in November 2015, arguing that the Hungarian government awarded the contract “without a transparent procedure.” Hungary initially argued that its intergovernmental agreement with Russia precluded the need to seek bids, but the Commission disagreed.

“Whether other providers could answer the requirements of [Hungary] had to be the result of a transparent [public procurement] procedure, not of assumptions on possible market responses,” staffers said in the summary of the February 12 meeting.

An earlier memo to Husak said that Hungary’s initial statements “clearly demonstrated that there are other competitors on the market, not only Rosatom.”

The “global political solution” emerged a few weeks later, as one of four potential next steps staffers outlined to Husak.

The first option was to dismiss the many justifications offered by Hungary — including the only one that had a connection to procurement rules, technical exclusivity — and escalate the case. “Hungary’s new arguments rely on exemptions, which have to be interpreted strictly,” the note said.

The second was to accept the argument. But this, staffers warned, could “contribute to a precedent of an overly lenient interpretation of the exception of technical exclusivity.”

Third, the Commission could accept that the Paks II subcontracts would still be offered under competitive tenders. However, the briefing said, the bigger contract’s award to Russia still “endangers the basis of a public procurement policy based on transparency and equal treatment.” It could also set a bad precedent for projects in other countries, it said.

Finally, there was the “political” option: Accept that Rosatom did meet Hungary’s exclusive technical needs, as long as the subcontracts were awarded through tenders. “The exact extent of the ‘technical exclusivity’ would have to be determined in consultation and agreement with Hungary.”

But the internal memos and minutes — in which Brussels officials repeatedly challenge the vagueness of Budapest’s replies and prompt it to improve its answers — undermine the Commission’s public statements about its eventual green light.

Caudet told reporters on November 21, 2016, about the factors that made Rosatom the only possible supplier, such as the size of the reactor and “the nature” of Hungary’s power grid. “On the basis of these elements our in-house experts on nuclear energy and nuclear safety concluded that the company in question was the only one that could meet those safety requirements,” she said.

“HU could not put forward real technical arguments, which justify that only Rosatom could execute the contract,” the minutes of a meeting on April 22, 2016 state. “The current arguments put forward by HU are primarily commercial.”

The tone suddenly changed in a meeting on April 28.

“The constructive nature of the meeting was appreciated by HU,” remarks the official taking the minutes.

The eventual compromise between Brussels and Budapest came despite serious concerns among other EU members and environmentalists about the need for a new nuclear station when cheaper renewables and electricity links were already available. Some of them objected to increasing dependence on Russian nuclear energy at the same time the bloc is trying to reduce Central and Eastern Europe’s reliance on Russian gas. They also pointed out that the EU had adopted a number of sanctions targeting Russia.

The decision to drop the complaint over the no-bid contract with Rosatom can’t be reversed. But these documents may fortify expected legal challenges over a separate Commission approval of Hungary’s state aid for Paks II earlier this year.

Rosatom said it plans to start construction in 2018.

This article has been updated with additional information on the 2016 referendum.