HomeEnvironmentPolitics of prayer in Kosovo
Environment

Politics of prayer in Kosovo

PRISTINA, Kosovo — In the rectory of Kosovo’s Cathedral of Saint Mother Teresa, a few days ahead of the consecration ceremony in September, Father Lush Gjergji can hardly contain his excitement. Casually clad in shirtsleeves and clerical collar, the diminutive but ebullient priest eagerly hands me an English translation of one of his many books about Mother Teresa.

Gjergji is something of an expert on the region’s most famous Catholic, who was born in Skopje, now the capital of Macedonia, when it was still a part of the Kosovo province of the Ottoman Empire. He met her more than 20 times — in Kolkata (then Calcutta), Kosovo and Albania — and accompanied her to Oslo when she was awarded the 1979 Nobel Peace Prize.

And so it’s only appropriate that Gjergji is the general vicar of a Catholic diocese dedicated to her memory. The cathedral is the first to have been built in the capital of Kosovo since the city was sacked by the Ottomans in the late 1600s.

An outsize Italianate building at the heart of Pristina’s concrete cityscape — whose consecration was attended by Kosovo’s president, Hashim Thaçi, and an Albanian representative of the Vatican — the building is not just a religious monument; it’s also rich in political symbolism.

Kosovo is eager to prove to the rest of Europe that its Muslim-majority population is nothing to worry about, and that it peacefully co-exists alongside its Christian counterpart.

The project was championed by the late former President Ibrahim Rugova, who led Kosovo’s ethnic Albanian majority in a campaign of resistance against Serbian repression in the 1990s.

For Rugova, the cathedral — towering over the corner where a street named for Bill Clinton meets one named for George W. Bush — is a way of signaling to Europe that its newest country, which declared independence from Serbia in 2008, is open and tolerant.

With one of the highest rates per capita of citizens signed up to radical Islamic groups in the Middle East, Kosovo is eager to prove to the rest of Europe that its Muslim-majority population is nothing to worry about, and that it peacefully co-exists alongside its Christian counterpart.

It’s a massive space for a potentially minuscule congregation. Ninety-five percent of Kosovars identify as Muslim. Only 2.2 percent — of a population of 1.9 million — consider themselves Catholic.

Gjergji — whose office is filled with portraits of the woman born Anjezë Gonxhe Bojaxhiu — said the cathedral will be open to everyone.

“The spirit of Mother Teresa is one of openness and acceptance and people of all faiths will be welcome here. By welcoming everyone, we not only honor Mother Teresa, but emulate her too,” he says. 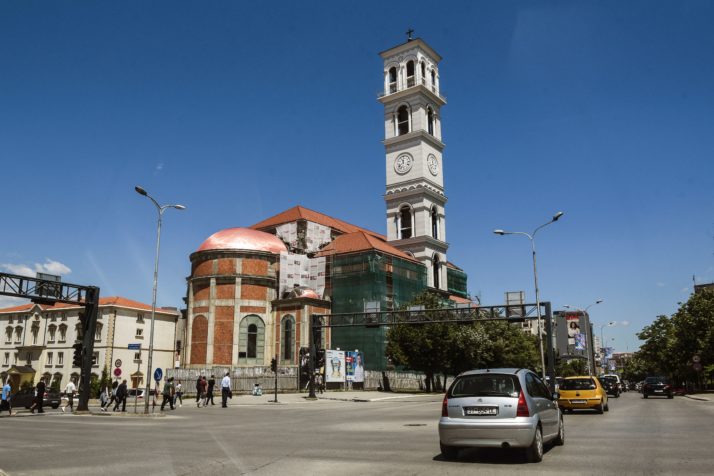 The consecration of the cathedral marked the return of Kosovo’s apostolic administration to Pristina after more than three centuries in a kind of internal exile.

After the body of Albanian Archbishop and resistance leader Pjetër Bogdani was exhumed by the Ottomans in the late 1600s and fed to the dogs in the city’s central square, Catholicism retreated to Prizren in Kosovo’s west, where it has been based ever since.

The consecration also marked — more controversially — the culmination of the church’s evangelization efforts here. “This is the crowning achievement of our work,” Gjergji says.

Indeed, since the Kosovo war, which ended with NATO’s 1999 bombing campaign and the end of Serb rule here, the Vatican has been making inroads in the country, despite not recognizing it as a sovereign nation.

It has made a vigorous push to convert Muslims to the faith, opened a number of Catholic schools, and been accused of courting certain politicians — including Rugova, who some believe converted to Catholicism before his death.

Driving this effort is the church’s unwavering belief that the Ottoman conquest of the Balkans — and the subsequent conversion of much of the region to Islam — represents a historical misstep that can and should be rectified.

Kosovo was Christian before the Ottomans, the church argues, and ultimately remains so at heart.

“We’ve always known that our ancestors were Catholic,” says Gjergji. “They only converted to Islam under the influence of the Ottomans.”

“This cathedral is symbolic of a spiritual renaissance that has been a long time coming.”

My translator winces at this. The suggestion that Kosovo’s Muslims are only nominally so understandably rankles. “He doesn’t talk like that to Kosovar journalists,” my translator tells me later.

There is also a widely-held perception that the cathedral is being constructed at the expense of non-Catholics.

A high school was razed to make space for it, forcing students to relocate to others on the city’s outskirts. The cathedral also received pride of place in the city center, while requests for land to build a new central mosque were initially rejected.

A site was eventually chosen for the mosque by the city council and a cornerstone laid in 2012, but the project has languished in the planning stages ever since. According to Ahmet Sadriu, the spokesperson for the Islamic Community of Kosovo, construction is “expected to begin soon.”

In 2010, days after the Mother Teresa cathedral was formally opened — even though then, as now, it remained a long way from completion — it was defaced with pro-Islam graffiti.

A five-minute walk away from the cathedral, Friday prayers are taking place on Bulevardi Bill Klinton. Hundreds of men point themselves toward Mecca and kneel on prayer mats and pieces of torn cardboard in the street. They sit quietly in the shade of trees and Coca-Cola umbrellas and listen to the imam’s sermon, amplified by hidden speakers above the stores.

When the imam finishes, the men stand, kneel again and bow their heads to the pavement. Then they fold their mats, ditch their cardboard and walk back toward the center of town past a statue of Clinton and a limp American flag.

“It’s an attempt to lie to the world about our identity … No one has a problem with the Catholics, but they’ve built this church to provoke the situation” — Albert Berisha

“We’ve had Catholics and Christians in our community for centuries, and we’ve never had any problem with them,” says Albert Berisha, a 30-year-old from Pristina, who traveled to Syria in 2013 to fight with the Free Syrian Army.

Disillusioned by what he saw there, he returned two weeks later and now faces three-and-a-half years in prison on charges of attempting to join the Islamic State, although he says he has dedicated himself to anti-radicalization projects since his return.

“They deserve to have churches everywhere they live, not only a big one in the center of the capital,” he says.

But he’s not a fan of the new cathedral. This church is “a political church,” he says, comparing it to the large Serbian Orthodox church that was built on Pristina’s university campus during the rule of Serb nationalist leader Slobodan Milošević and has since become the target of a series of peaceful student protests.

“The Catholic Church wants to tell the world that we Kosovars are Catholics and that Islam only came with the Turks,” says Berisha. “It’s an attempt to lie to the world about our identity … No one has a problem with the Catholics, but they’ve built this church to provoke the situation.”

Sadriu, of the Islamic Community of Kosovo, takes a more conciliatory tone.

“Albanians have historically cultivated interfaith harmony and tolerance, which are deeply embedded in our national identity,” he says.

He describes the early acts of vandalism at the cathedral as the work of someone who may have been “manipulated” and says the situation was overcome “thanks to understanding that exists between brothers.”

Back at the cathedral, Father Gjergji takes me on a tour of the construction site. Stained-glass windows — probably a little kitschy for some tastes — illustrate the history of the Catholic Church in the region from the ancient territory of Illyria to the communist era.

In one window, a beaming Pope John Paul II holds Mother Teresa’s hands in his. In another, Pope Benedict XVI passes the figurative baton to Pope Francis, who visited Albania in 2014 on his first European tour. Workers hang off scaffolding in front of a towering new altarpiece.

Gjergji says he hopes the cathedral will be a place of pride for all Kosovar Albanians regardless of their religious affiliation. “Our shared sense of nationality is far greater than any religious differences,” he says.

Matthew Clayfield is a freelance journalist.

The post Politics of prayer in Kosovo appeared first on News Wire Now.