In Northern Ireland, history repeats itself

LONDON — History “is a nightmare from which I’m trying to awake,” says Stephen Dedalus in James Joyce’s Irish literary masterpiece, “Ulysses.” Nowadays, history is like being stuck in an Irish comedy club with bad stand-ups doing unfunny jokes and the exit doors locked.

Those of us who live in the U.K. have heard these gags before. But they’ve taken on new potency over the last few days as the Democratic Unionist Party reintroduced itself to Europe by doing what it does best: wrecking things.

DUP politicians, always on the lookout for a conspiracy to bring them under the rule of a Catholic Irish government, dismissed Dublin’s suggestions about how to solve the post-Brexit border problem as a backdoor effort to create a united Ireland. And in the process, they scuppered what progress might have been achieved between British and European negotiators this week in Brussels. The only response to the DUP’s paranoia is: “Are you joking?” Like I said, there’s no escaping the unfunny jokes.

The reality is that the border between Northern Ireland and the Republic of Ireland — created by the partition of the island in 1921 — has been meaningless for decades. That was always the unwritten goal of the Good Friday Agreement.

There was more, of course, to the Good Friday negotiations. Among the issues during the drawn-out discussions: How do you legitimize the leaders of Sinn Féin, a political party with a genuine voting constituency but whose paramilitary wing, the IRA, was at the heart of the civil war? How does the British government negotiate with a plethora of protestant Unionist parties that don’t always speak with one voice?

The DUP in those days was the second largest of these parties, and it was led by a man with the loudest voice in British politics, Ian Paisley. He and his team of MPs blocked, roared and yelled every step of the way. But they misjudged the politics of the moment badly.

The people of Northern Ireland were exhausted by the situation. They were fed up with being garrisoned by nearly 20,000 British troops. Most understood that the political deal was not about uniting Ireland. The anger among hardcore DUP supporters about Sinn Féin’s Gerry Adams and Martin McGuinness evading justice for their roles in the carnage of the previous quarter century was offset by the prospect of an end to the war. 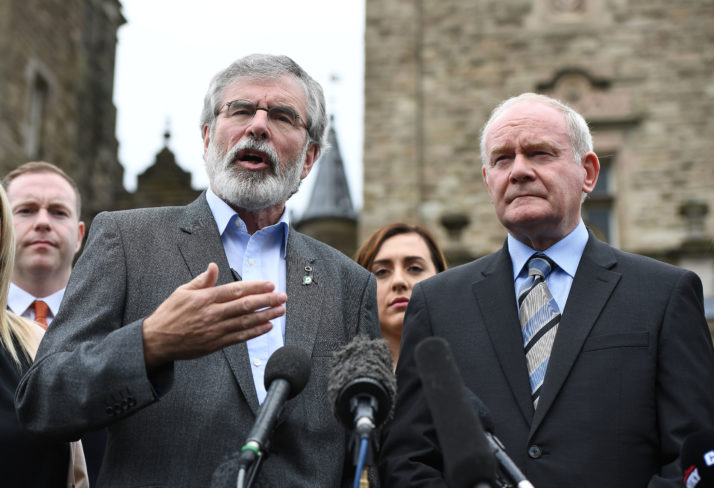 Martin McGuinness (R) and Gerry Adams (L) giving their reaction to the EU Referendum vote at a press conference outside Stormont Castle on June 24, 2016 in Belfast| Charles McQuillan/Getty Images

As this political process unfolded in the North, the EU was funding a great leap forward in the Republic of Ireland’s economy. The Celtic Tiger was a success. Even unionists could see the Republic was a modern, dynamic state. It was the time to make the border meaningless.

The DUP’s Ian Paisley roared against the deal when it was struck on Good Friday, 1997, and he roared throughout the ratification referendum campaign. But his roar was drowned out at the referendum count at the King’s Hall in Belfast — by the jeers of men who had responded to his dog whistles about Catholics, joined protestant paramilitary groups and lost years of their lives inside the Maze prison. As the overwhelming vote in favor of the agreement was announced, Paisley stormed out of the hall trailed by his young team.

Not quite a decade later, having wrecked the rival Unionist parties and nearly ruining the Good Friday Agreement, Paisley — who died in 2014 — finally got the politics right and ended up as first minister in Northern Ireland with Martin McGuinness as his deputy. He decided to make the Agreement work after all.

The DUP could use him about now. The party’s new leader, Arlene Foster, doesn’t quite roar at his level. But she knows how to turn a party with 10 seats in a Parliament of 650 into a very important faction.

This week, Paisley’s 1997 team have been hauled back in front of the cameras: older, grayer and just as intent on wrecking things as they were back then. MPs like Jeffrey Donaldson— or Sir Jeffrey as he has now become — are trotting out the old lines about Sinn Féin controlling the Irish government. The inference is that the Brexit border dispute was dreamed up by the Republic of Ireland as a crafty way to unite the island.

What Donaldson et al don’t mention is that Northern Ireland voted to remain in the EU by a wider margin than the U.K. voted to leave. The areas along the border overwhelmingly voted to stay in the bloc. Politicians less wedded to crashing out of the EU without a deal than Donaldson are entitled to suspicions about collusion between the DUP and the Conservative Party’s own wreckers. 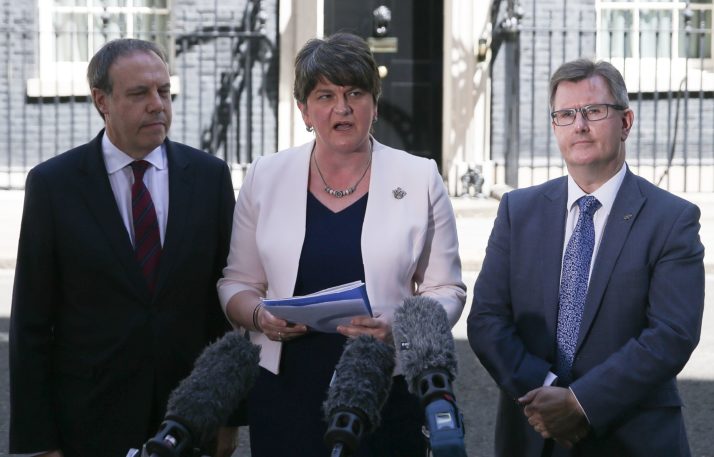 For decades, the anti-EU faction in the Tory party made life hell for its leaders: They ruined the premiership of John Major and tortured David Cameron into his folly of a Brexit referendum. Now they are doing their best to thwart Prime Minister Theresa May’s attempts to negotiate an exit from the EU that doesn’t completely destroy the British economy.

The hardest of hard Brexiteers have been lavishing praise on the DUP this week. Tory MP Jacob Rees-Mogg said he was in complete agreement with the DUP, and he reminded people of the Tory party’s full name: “We are the Conservative and Unionist party after all.”

This has been a glorious week for the wreckers. But, like Paisley in 1997, they may have misread the politics of the moment. The latest surveys show that among those who voted to leave the EU, many are now concerned that Brexit negotiations will result in a bad deal. A growing number also say they want a second referendum to ratify whatever deal is finally agreed. Looking at current polling trends, the government could very easily lose such a second referendum.

And what then? The whole process could start all over again. There may be no waking up from this particular nightmare, it seems.