Nasty side of Catalan question deepens rift between ‘two Spains’

BARCELONA — On September 3, a woman tweeted that she had just seen Inés Arrimadas, spokesperson for Spain’s centrist Ciudadanos party, speaking on television and called her “a disgusting b–ch” who deserved to be gang-raped.

Ten days later, death threats against the anti-capitalist politician Anna Gabriel, of the Popular Unity Candidacy (CUP), were painted on the sidewalk outside Valencia University, where she was due to talk later that day. “Shoot Ana [sic] Gabriel,” read one, with a crosshair below her name.

Arrimadas, one of the most visible faces of Spanish unionism, and Gabriel, whose CUP is the most radical secessionist party in mainstream politics, represent opposing ends of the Catalan political spectrum.

But the two incidents have something in common: They’re the result of an increasingly polarized debate in Spain about the future of its northeastern region ahead of an October 1 independence referendum — which Madrid deems illegal.

No longer confined to social media and fringe political agitators, the sharp tone has infected mainstream media and the political arena. The deepening rift between the two sides of the debate — fueled by factors peculiar to Spain and its restive region — make the likelihood of finding a resolution to the standoff between Madrid and Barcelona increasingly difficult.

Tensions between the Spanish and Catalan governments have been brewing since 2012, when the regional administration announced its intention to pursue independence, citing Madrid’s refusal to discuss devolving further financial powers. This year, the Catalans’ plan to stage the October referendum and the central government’s refusal to debate such a vote inflamed the situation.

The hostility escalated in early September, when the pro-independence parties that hold a narrow majority in the Catalan parliament controversially altered the chamber’s order of business for two days, forcing onto the agenda two bills that sought to pave the way for the referendum and then independence. 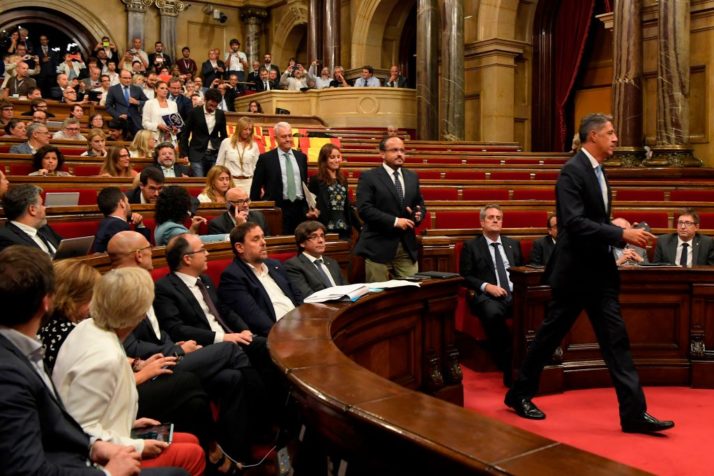 Catalan PP leader Xavier Garcia Albiol, right, and other MPs leave the parliament before a vote on the referendum bill on September 6 | Lluís Gené/AFP via Getty Images

“You have become the main threat to the European Union at this moment,” Xavier García Albiol, of the Popular Party (PP), which governs Spain, told the pro-independence parties in the ensuing debate. “Your process of radicalization embarrasses anyone with a minimum of respect for democracy and freedom.”

Such language has become commonplace in the Catalan debate. Yet the accusations of law-breaking and totalitarian tendencies fly in both directions, with the ghost of right-wing dictator Francisco Franco never far away.

“Francoism didn’t die on November 20, 1975, in a bed in Madrid,” Gabriel Rufián of the separatist Catalan Republican Left (ERC) party, tweeted a few days after the fractious debate. “We tell the world that Franco died on October 1, 2017, before a ballot box in Catalonia.”

Rufián and other secessionist Catalans claimed the Franco comparisons were particularly apt after the Spanish Civil Guard raided Catalan government premises in Barcelona on September 20, arresting 14 members of the regional administration on charges of organizing the referendum. Elsewhere, the police seized 10 million voting slips from a warehouse.

“These are two political agendas that feed off each other but don’t offer a solution” — Carles Ruiz, mayor of Viladecans

As Catalans poured onto the streets of Barcelona and other cities to voice their anger at this unprecedented intervention by the Spanish state in one of its 17 regional administrations, Spain’s simmering territorial crisis erupted.

For those on both sides, the problem is a clear-cut one.

Mariano Rajoy’s central government sees a rogue administration violating the 1978 constitution, a document many people on the left and right still revere as the scaffolding of modern Spain. Secessionists claim Rajoy wants to deny them a basic democratic right: voting on their future.

“There’s a political problem here and one side has proposed a solution — to hold a referendum — and the other side doesn’t want to even sit down and talk,” said Ramon Piqué, manager of the pro-independence campaign for the Catalan National Assembly (ANC).

“This is black and white — there are no shades of gray.”

This cleavage may be rooted in ideology — protecting the constitution versus the right to vote — but it has also been fueled by the fact that both sides have reaped political benefit from the stand-off.

“These are two political agendas that feed off each other but don’t offer a solution,” said Carles Ruiz, mayor of the town of Viladecans, near Barcelona, for the Catalan Socialist Party (PSC), which advocates a somewhat less strident unionist vision than the Spanish government.

Rajoy’s conservative Popular Party, Ruiz said, “has exploited the territorial issue in order to win votes and get into power.” Taking a tough, legalistic, stance on Catalonia may have hurt the PP’s support in that region, but it has played much better across the Spanish heartland and helped the party shore up its voter base.

‘A country of conflict’

Rajoy, ironically, has become a useful recruiting tool for the independence movement. His refusal to engage with his antagonists or countenance a referendum has repelled many Catalan moderates, pushing them into the arms of the secessionists.

The police raids in Barcelona earlier this month, although instigated by a Catalan judge, were seen as part of the PP government’s strategy. The subsequent wave of protests took aim at the Madrid government as much as the justice system.

But the vehemence of the animosity between Madrid and Barcelona can’t solely be chalked up to the territorial debate. The reasons behind it go to the heart of how politics works in Spain.

“We have a political culture according to which the priority is to maintain your stance and not make concessions,” said Oriol Bartomeus, a political scientist at Barcelona’s Autònoma University.

“If you look at the history of Spain, reform has always been very difficult to carry out, because reform implies making pacts and therefore making concessions. In Spain, that way of doing things doesn’t exist.”

This intransigence doesn’t only affect Spain’s conservatives and Catalonia’s separatists. The leftist Podemos is known for its refusal to compromise and the Spanish Socialist Party was thrown into chaos last year when leader Pedro Sánchez refused to abstain in Congress, obstructing Rajoy’s efforts to form a new government.

The rigid political culture echoes the historical and much-cited concept of “two Spains” — a country so deeply politically divided that those on the left and right feel as though they belong to separate nations. 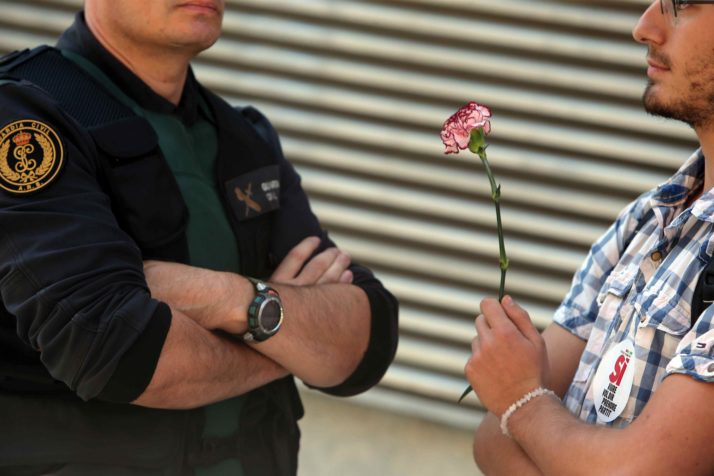 A man protester, next to a Spanish Civil Guard officer, during a search in Terrassa | Toni Albir/EFE via EPA

According to Bartomeus, the divide remains a defining feature of modern politics in large part because the country’s conservative powers have tended to flourish without needing to introduce major political or territorial reforms.

“The other side has only been able to fight this through insurrection,” he said. “So Spain has always been a country of conflict.”

Spain is a “country of extremes,” said Dolores Agenjo, a former school principal in the Catalan town of L’Hospitalet de Llobregat.

Agenjo drew ire from many pro-independence Catalans when she refused to allow her school to be used as a voting station in a non-binding independence referendum in November 2014. Her decision, she said, was driven by the vote’s dubious legality.

Agenjo is part of the leftist civic group Plataforma Ahora. But it irks her that in the eyes of many, her unionist sympathies automatically place her on the right.

“Franco did a lot of damage because he contaminated the idea of Spain,” she said. “If you say ‘I’m Spanish, I love my country, I want a united Spain,’ it’s as if you’re pro-Franco.

“The political right has appropriated the idea of defending Spain and the left, in response to this appropriation, has become seen as anti-Spanish because it’s reluctant to defend Spain and wave the Spanish flag.”

As a result, a large section of the Catalan population, who favor neither independence nor the brand of unity advocated by Rajoy, has been marginalized.

Bartomeus, of Barcelona’s UAB, believes around 1.5 million of Catalonia’s 5.5 million eligible voters fall into this category.

And yet, these voters are scantly represented in the political arena. Catalan and Spanish Socialists have a more nuanced stance on Catalonia than the PP and have called for federal reform. But they also feel compelled to back the government’s opposition to the October 1 referendum on the grounds of its potential illegality. 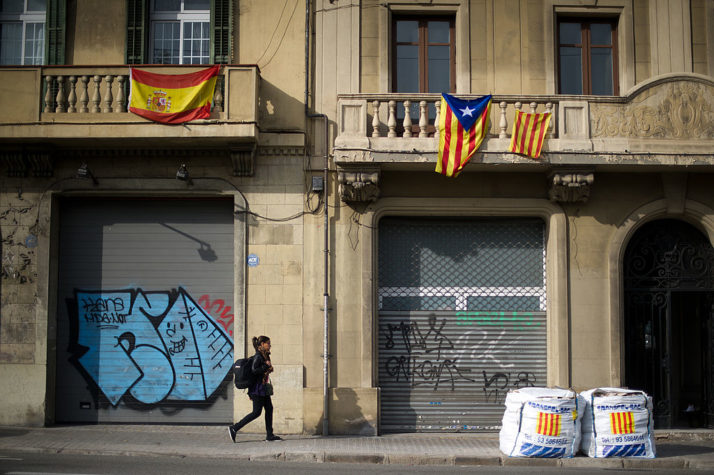 A Spanish flag, a pro-independence “Estelada” and a “Senyera,” the Catalan flag, in Barcelona | David Ramos/Getty Images

The Socialists’ role in drawing up a new statute of autonomy for the region in 2006 — which was first watered down and then cut back — has undermined their credibility in the mind of many Catalans. Meanwhile, Podemos has called for a negotiated referendum but is finding it hard to present a coherent stance on the issue because of party infighting.

As the crisis deepens the rift between the two sides, those Catalans caught in the middle feel left out in the cold.

“This is a conflict that is depicted only in black and white and nobody seems interested in looking at the gray areas,” said Barcelona resident Javier Castellanos, who used to support independence but says he now feels disillusioned.

The Catalan question has snowballed into Spain’s biggest crisis of the democratic era.

“Either you’re in favor or against. When this kind of divide over nationality happens, it’s always the same.”

The ideological clash at the heart of this standoff — self-determination versus rule of law — in combination with electoral self-interest and a rigid Spanish political culture, means the Catalan question has snowballed into Spain’s biggest crisis of the democratic era.

To resolve it, the “two Spains” will have to acknowledge shades of gray ignored for many years. 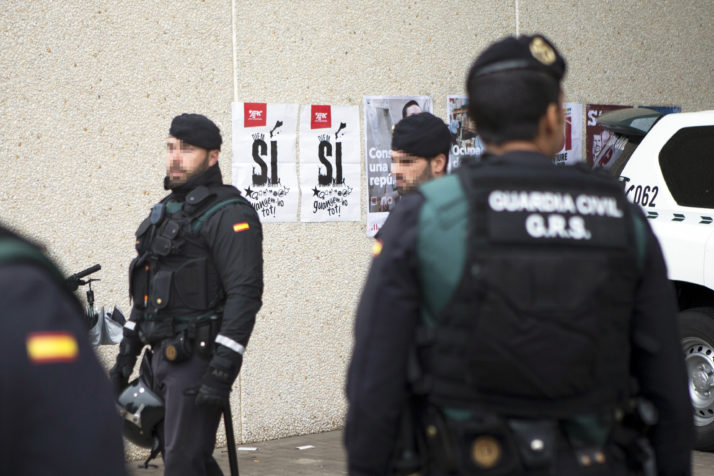