LONDON — Theresa May faces a fierce backlash from Brexit-supporting Conservative MPs over what they see as concessions made to avoid a hard border on the island of Ireland.

After failing to secure agreement in Brussels to move Brexit talks onto the next phase, the U.K. prime minister returned to London where debate raged about the kind of relationship Britain wants to have with the EU after Brexit.

The dispute brings to the fore the fundamental trade-offs in its Brexit strategy that the government was always going to have to face up to — stay close to EU rules but sacrifice some freedom to strike trade deals elsewhere, or diverge from the EU and risk trade barriers and potentially a hard border on the island of Ireland.

Talks in Brussels collapsed Monday when Arlene Foster, leader of Northern Ireland’s Democratic Unionist Party, went on television to say that her party — which props up May’s government in Westminster — would not agree to “any form of regulatory divergence” that separated Northern Ireland from the rest of the U.K.

Brexit Secretary David Davis confirmed to MPs Tuesday that the U.K. is seeking a form of “regulatory alignment” with the EU, but that it would apply to the whole of the United Kingdom.

“There will be huge concern among backbenchers” — David Jones, former Brexit minister

One former Brexit minister, David Jones, said there would be “huge concern” among backbenchers if the government does accept, in its phase one agreement with the EU, that there must be U.K.-wide regulatory alignment with the EU in order to avoid checks on the border between Northern Ireland and the Republic of Ireland.

While government officials declined to confirm what form this would take, ITV’s Robert Peston reported the U.K. may seek to limit such measures to those sectors affected by the Good Friday Agreement — most importantly agriculture — and the single energy market in Ireland.

But Jones said that this would still be “problematic” as agriculture would be a “major factor” in any free trade agreement.

“There will be huge concern among backbenchers,” he said. “Obviously we want to be in a position to conclude [Free Trade Agreements] and if agriculture is one of those areas of so-called alignment, it makes it difficult to see how we could conclude those FTAs.” 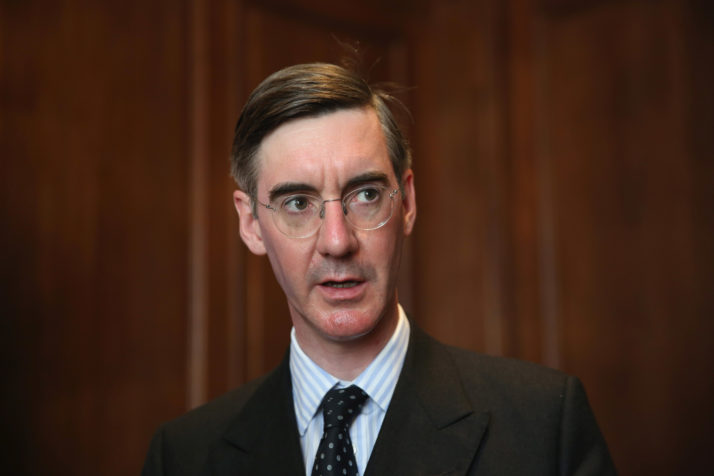 Jones said he had “no doubt” that there were concerns within Cabinet about the issue. May’s Cabinet, which met Tuesday to discuss the stalled talks, is reportedly split between those who favor greater divergence from Brussels’ rules, and those prepared to keep regulation similar after Brexit to maintain the best possible trade links.

One of his backbench allies, Jacob Rees-Mogg, went as far as to challenge Davis — a Brexiteer himself — in the House of Commons, to confirm that divergence from EU rules would be a “red line” for British negotiators.

Davis declined to say it would be.

It’s a debate most were expecting to the government to have in phase two of the negotiations. But demands from the Irish government for clarity about the Northern Irish border had forced the issue, said Matthew O’Toole, a former chief press officer at No. 10 Downing Street who focused on Brexit.

May probably didn’t want this fight at this stage, he added. “The reason it’s happened is the Irish government, in concert with the EU, has decided to ask for more guarantees than the British thought they were going to have to give in phase one.”

“There’s been this question about when do you actually face up to the big trade-off — about the type of future relationship you actually want,” he added.

“It appears the government has gone slightly further on that than it would probably have planned to at this stage.”

Brexiteers are concerned that the U.K. may also make concessions on the role of the European Court of Justice in the U.K. after Brexit, in order to gain a verdict of “sufficient progress” at next week’s European Council, one senior Brexit-supporting MP said. 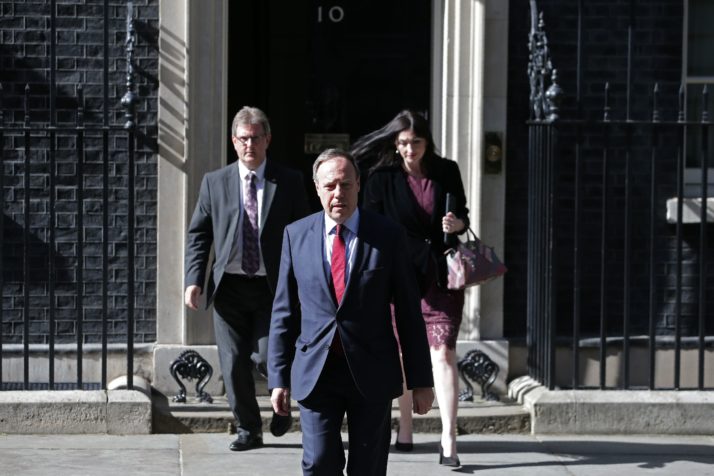 Nigel Dodds, front, deputy leader of the DUP, said he did not want to see a no-deal scenario | Daniel Leal-Olivas/AFP via Getty Images

It’s not clear, however, what the Brexiteers’ options are. The MP, who spoke on condition of anonymity, said that a delegation of colleagues had made their views known to No. 10 and the prime minister.

But the nuclear option — a leadership challenge to May — remains unlikely as Tory MPs still calculate that a move against May risks an election, which the opposition Labour party are currently in a strong position to win.

“If regulatory alignment in a number of specific areas is the requirement for a frictionless border, then the prime minister should conclude that this must be on a U.K.-wide basis,” she said.

May is planning to return to Brussels to push through an agreement later in the week. But at home, she leaves behind a troubled and divided Conservative party.

The Democratic Unionist Party stood firm Tuesday, but showed willingness to back the government as long as their demand that the Brexit settlement cause no disruption to trade within the U.K.

Their deputy leader Nigel Dodds, speaking outside parliament, said he did not want to see a no-deal scenario, but would not accept any language in an agreement that saw Northern Ireland “separated politically or economically from the rest of the U.K.”

May’s task now is to offer those reassurances. A Downing Street official said she was expected to speak to DUP leader Arlene Foster on the phone Tuesday evening, as well as contacting Sinn Féin’s Northern Ireland leader Michelle O’Neill.

Next, she is planning to return to Brussels to push through an agreement later in the week. But at home, she leaves behind a troubled and divided Conservative party.

Share on FacebookShare on TwitterShare on PinterestShare on LinkedIn Share on TumblrShare on RedditShare on VKontakte
adminDecember 16, 2017