If Paris and Rome carry through with their plans to ban glyphosate, a small group of French, Italian and Belgian chemical companies are poised to reap the benefits.

When the two countries announced Monday that they would ban the controversial weedkiller by 2020, the decisions seemed like knee-jerk reactions to being on the losing side of a vote in Brussels to extend the license of the world’s most common herbicide for another five years.

But French President Emmanuel Macron’s promise to outlaw glyphosate in France as soon as “alternatives are found” wasn’t fueled by blind faith. After all, he and Italian Prime Minister Paolo Gentiloni can’t risk infuriating powerful agricultural constituencies that see weedkillers as vital for growing everything from barley to carrots.

In fact, both France and Italy have a Plan B: a more natural product that threatens to oust Monsanto’s ubiquitous glyphosate-based herbicide Roundup from its dominant position in European agriculture.

Government officials and executives from chemical companies said a Belgian-French-Italian collaboration in the works since 2015 aims to dethrone the Missouri-based agrochemical giant.

The intense, drawn-out political debate over whether glyphosate is harmful to people and the environment has largely obscured behind-the-scenes maneuvering by chemical companies vying for a foothold in the multi-billion euro pesticide business. 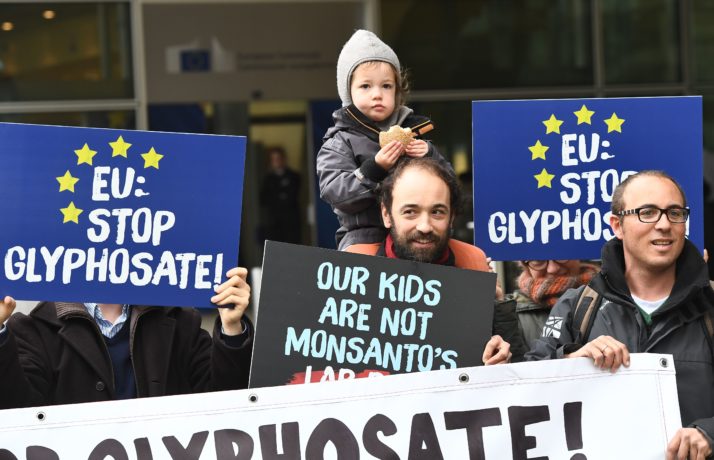 A Brussels protest this month | Emmanuel Dunand/AFP via Getty Images

Europe’s alternative to glyphosate is based on pelargonic acid, a naturally occurring chemical found in a host of plants, thistles in particular. The primary manufacturer is a business called Jade based on the outskirts of Bordeaux, which has an exclusive distribution agreement with Novamont, an Italian chemicals company.

Pelargonic acid is a “very effective herbicide and certainly one of the substances that could be considered as an alternative to glyphosate,” said Bruno Caio Faraglia, who is responsible for phytosanitary products at Italy’s agriculture ministry.

He conceded the product costs more than glyphosate but stressed that rolling it out would be in line with Italy’s attempt to work “toward sustainable agriculture with a completely different approach.”

“We have been working for several years toward an agricultural model that is not reliant on glyphosate,” he said.

When asked about pelargonic acid, a spokesperson for France’s agriculture ministry said the ministry “will mobilize all its resources to invest in scientific research to find an alternative to glyphosate. There will not be one solution and our scientists are looking at finding different molecules, new more resistant seeds, robotics and other agricultural products.”

On Monday, France, Belgium and Italy joined six other countries to vote against a new license for glyphosate. They lost the vote when Berlin cast the swing ballot in favor of the weedkiller, extending the license by five years. The German chemical giant Bayer is poised to acquire Monsanto for $66 billion.

The decision by national experts in a food safety committee marked the culmination of a bitter political debate over whether glyphosate is a carcinogen. In 2015, the World Health Organization’s International Agency for Research on Cancer (IARC) said it “probably” causes cancer. Both the European Food Safety Authority and the European Chemicals Agency subsequently declared glyphosate as safe for use, however.

The Franco-Italian pelargonic acid businesses hope to avoid these health fears. Europe’s food and chemical authorities have approved pelargonic acid for commercial use in the EU, but say that it should come with a warning stating that it can cause serious eye irritation, harm aquatic life and provoke skin complaints.

Pesticide experts acknowledge that while pelargonic acid-based weedkillers are not as effective as glyphosate — it does not destroy roots — the herbicides are seen as a “natural” alternative. One lobbyist working on chemicals said the risk was that weeds would return the year after treatment, and quipped that it was suitable only for “amateur gardeners.”

Jade, the French manufacturer, is wholly owned by a Belgian company, Belchim Crop Protection. The company’s herbicide product, marketed as Beloukha, is 70 percent pelargonic acid and was authorized in France in 2014. Between June and August, Italy approved four plant-care products manufactured by the company.

Vincent Van Langendonck, a commercial manager at Belchim, said pelargonic acid is “a natural solution to glyphosate that can kill weeds and moss.”

“I think that governments could be interested in considering an alternative to the chemical weedkillers currently on the market,” he said.

He added that pelargonic acid is a natural product that breaks down very easily in the soil.The Fédération Nationale des Syndicats d’Exploitants Agricoles, a massive French farmers’ union, said it had not yet identified pelargonic acid as an alternative to glyphosate. 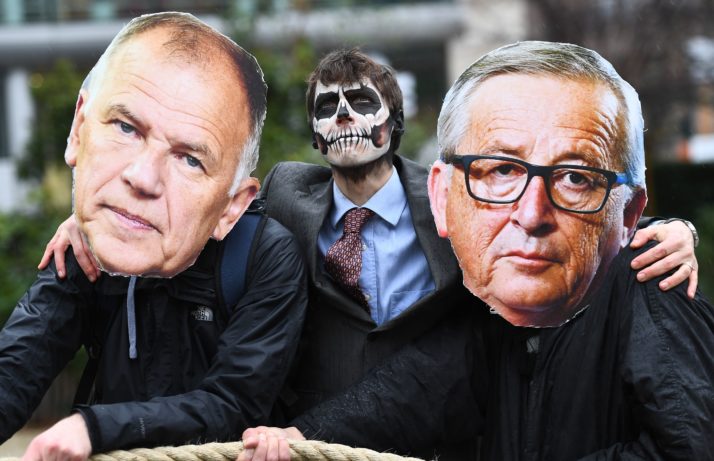 However, the union has recently signed an agreement with 40 other agricultural organizations to reduce the levels at which glyphosate is used and “adopt alternatives in order to protect crops and respond to society’s expectations.”

Pelargonic acid has been widely used in weedkiller for years but at very low percentages. Monsanto’s Roundup is composed of 2 percent of the substance. The new generation of bioherbicides in Italy and France contain approximately 70 percent. A handful of other European companies also produce similar herbicides using pelargonic acid but with lower levels.

In Italy, Novamont struckan agreement in 2015 with Consorzi Agrari d’Italia, an umbrella organization for farmers’ cooperatives, to sell Beloukha across the country to treat grapes and potatoes. Novamont, whose shareholders include subsidiaries of the oil giant Eni and which has operations making pelargonic acid in Porto Torres, Sardinia, has an exclusive distribution agreement for the bio-herbicide.

Italy’s leading farm union Coldiretti, all of whose members belong to the Consorzi Agrari d’Italia, has been one of the leading opponents of glyphosate, breaking ranks with agriculture lobbies in other parts of the bloc.

Banning glyphosate in the EU would provide a “great opportunity” for Novamont, its managing director, Catia Bastioli, said in an interview published November 6 in Italy’s Corriere della Sera daily.

Share on FacebookShare on TwitterShare on PinterestShare on LinkedIn Share on TumblrShare on RedditShare on VKontakte
adminDecember 17, 2017