Brexit is a chance to take back control of our environment

LONDON — Our membership of the European Union has been a matter of passionate debate for years. In January 1973, when we first joined its forerunner, the Common Market, it’s fair to say the public mood was mixed. While some intrepid folk headed to coordinated “Continental Cooking” demonstrations laid on by the Gas Board there were demonstrations of a different kind in London. Dissenters outside the Royal Opera House booed as the queen and the prime minister, Ted Heath, arrived for a celebration gala.

Now that we are on a journey to leave, feelings are still mixed. For some, Brexit is a potentially exciting moment, a chance for a fresh approach and to grasp new opportunities. Whereas for others this is a moment of challenge and a fear that some of the benefits and protections of our EU membership might disappear.

Nowhere is this truer than the environment. It is undoubtedly the case that some policies integral to the EU, such as aspects of the Common Agricultural Policy (CAP), have done damage. During our membership there have also been actions for good — particularly around environmental principles and governance. We see this in the attention paid to high standards of biosecurity, cleaner air and beaches, and the protection of certain wildlife species.

Yet one of the main reasons why I campaigned for the U.K. to leave the EU was the long-term harm inflicted by the CAP and the Common Fisheries Policy (CFP). Both have been reformed in their time — gone are the heavily-subsidized butter mountains and wine lakes; North Sea cod stocks are better than they once were — but neither properly put the environment first.

I know first-hand how the CFP has led to over-fishing and undermines local economies.

The CAP is particularly relevant to the U.K., where agriculture accounts for 71 percent of land use. Each year, around £3.2 billion comes to U.K. farmers under the CAP. Of this, a full £2.6 billion is not paid according to how farmers manage their land but according to the size of their holdings. This perverse arrangement means public money flows to those who are already wealthy. It does little to encourage them to use land in a way that respects precious natural resources and wildlife. In England only a sixth of total CAP spending is directed specifically at environmental stewardship. Along with many farmers and others who care passionately for the natural world, I believe this is not nearly enough.

As for fishing, I grew up in a coastal community in northeast Scotland where my father was a fish merchant. I know first-hand how the CFP has led to over-fishing and undermines local economies. In the Atlantic, North Sea and Baltic Sea, many stocks are still being fished at unsustainable levels. And while our fleet catches on average around 120,000 tons of fish from other member states’ waters, EU vessels catch more than 850,000 tons of fish in U.K. waters.

Future financial support for farming will see public money paying for public goods, incentivizing more sustainable land use and the creation of new wildlife habitats. We will support farmers to plant more wildflowers and trees, restore habitats for endangered species and improve soil fertility. As an island nation, we will develop a fishing policy that ensures the seas teem with life, tackles the scandal of marine pollution and extends protected areas to preserve our precious maritime heritage.

Earlier this month the prime minister, Theresa May, launched our 25 Year Environment Plan. Its lifespan is deliberately longer than the usual five-year political cycle to reflect the long-term needs of the natural world. The plan shows the way to Green Brexit and beyond. It lays out how we will strengthen and enhance our landscapes, rivers, coastline and wildlife by developing new ways to support land use and fisheries that put the environment first. As part of this we will also ensure security in the food chain. We will tackle our addiction to wasteful, polluting, single-use plastics and look to improve the purity of our air and water.

At the last election, we made a manifesto promise to be the first government to pass the environment on to the next generation in a better state than we inherited it. Our pledge extends beyond national boundaries. Air pollution, after all, obeys no frontiers. Plastic bottles, straws and bags dumped off our shores can choke marine life, trash oceans and spoil the coastlines of any number of other nations. In a Green Brexit, the U.K. will champion international action and continue to work with our European neighbors to protect the globe. 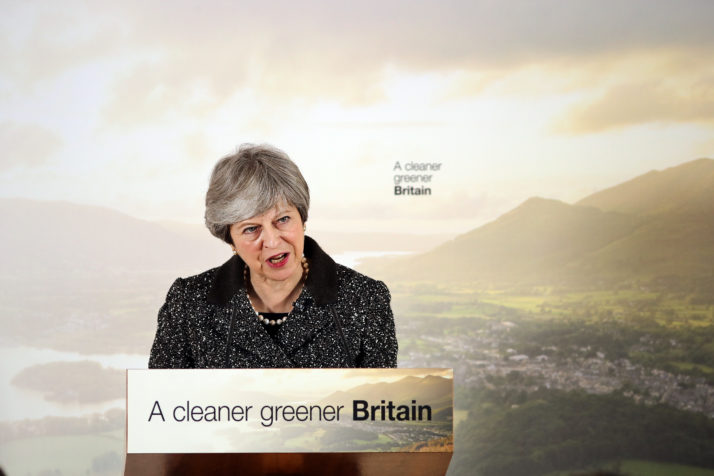 The EU has also taken action to protect the environment, at times influenced by British politicians, such as Margaret Thatcher and John Gummer, as well as politicians from other countries such as the former fisheries commissioner, Maria Damanaki. We will preserve and where appropriate extend these measures. The first step is to make sure the whole body of existing European environmental law continues to have effect in U.K. law. Thanks to our EU (Withdrawal) Bill, stringent targets and standards will continue to be in place from Day One.

We also want to ensure that environmental principles continue to be set out in a single place — at present, this is in the EU treaties — after we leave. The principles cover issues such as sustainable development, for example, and the important “polluter pays” understanding which holds that those responsible for damage must pay to put it right. We will be consulting on a new policy statement setting out the environmental principles which will guide us.

That consultation will also cover the key areas of governance and accountability. It’s important to us and to future generations that environmental oversight is strong. Currently the role is played, albeit imperfectly, by European institutions and we will look to replace it. For while the U.K. enjoys vibrant democracies and robust laws, it is still the case that nature lacks a voice: it cannot sign petitions or lobby MPs. Our response is to consult on setting up a new, world-leading, independent statutory body to hold the government to account on the environment. We envisage that the new body will speak up and take action when the environment is under threat.

Throughout, we will work closely with the devolved administrations of Scotland, Wales and Northern Ireland on our respective environmental policies as we decide upon our future stewardship of the natural world.

We have much more to do and Green Brexit is just the start. There is, after all, no Planet B.

This focus on a Green Brexit is not at the expense of a resilient economy. We will look to boost productivity and prosperity by reaping the rewards of the clean growth revolution and innovative technologies. In future, a healthy economy and a healthy environment will be ever more closely linked. The world is facing changes that are far more profound than the U.K.’s decision to leave the EU. The global population is growing fast and moving from the countryside to cities. There is a growing demand for the planet’s precious ‘natural capital’ — assets we all rely on for life, such as clean air and water, high-quality food and energy sources to fuel growth.

It is critical, if future generations are to flourish and enjoy abundant natural resources, that governments around the world look after this shared inheritance. Previous administrations have made welcome strides and driven improvements. But we have much more to do and Green Brexit is just the start. There is, after all, no Planet B.

Michael Gove is the U.K. secretary of state for environment, food and rural affairs.