The honor has fallen to pastry chef Claire Ptak, who was raised in California and now owns London-based bakery Violet Cakes, Kensington Palace announced Tuesday.According to the palace, the couple asked Ptak to make a "lemon elderflower cake that will incorporate the bright flavours of spring" rather than the more traditional fruitcake. It will also feature buttercream and fresh flowers as decoration.The bride-to-be is already acquainted with Ptak, having interviewed her for her former lifestyle website The Tig."Prince Harry and Ms. Markle are looking forward to sharing the cake with guests at their wedding at Windsor Castle on May 19th," wrote Kensington Palace on Twitter. "I can't tell you how delighted I am to be chosen to make Prince Harry and Ms. Markle's wedding cake," Ptak said in a statement released by Kensington Palace. "Knowing that they really share the same values as I do about food provenance, sustainability, seasonality and most importantly flavour, makes this the most exciting event to be a part of." 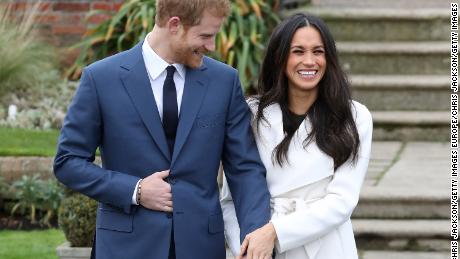 Ptak describes herself as "a food writer, food and prop stylist, recipe developer and consultant" who started her bakery business in a market stall before opening a café in East London in 2010. She focuses on using seasonal and organic ingredients.Prince Harry and Markle are not the first royal couple to deviate from more traditional cake choices. At his wedding to Kate Middleton in 2011, Prince William requested a "groom's cake" made of cookies and chocolate.On that occasion, the "chocolate biscuit cake" was served alongside the official wedding cake — a fruitcake.Prince Harry and Markle announced their engagement last November and will marry in St. George's Chapel in Windsor Castle.More than 2,600 people, many of them ordinary members of the public, will be invited into the castle grounds to watch the arrival of the bride and groom and their guests.The guest list for the ceremony itself and the reception afterward has not yet been released.

Share on FacebookShare on TwitterShare on PinterestShare on LinkedIn Share on TumblrShare on RedditShare on VKontakte
adminMarch 21, 2018