There is a “direct link between alcohol and fatal cancers” — that’s what Irish health officials want their country’s drinkers to know each time they look at a bottle of alcohol.

Even as producers of wine, beers and spirits fret about any European Commission regulation that would force them to list ingredients and calories on their products, health officials in Dublin are making a big push for what the alcohol industry considers a nightmare scenario: mandatory cancer warnings on liquor.

“Reducing alcohol intake is an important step in reducing the burden of cancer,” Irish Health Minister Simon Harris said in February, ahead of submitting to the parliament a bill with proposals that include some of the toughest provisions on alcohol labeling on the Continent, including a label stating the link between drinking and cancer.

“This is a landmark piece of public health legislation which will make a real difference when it comes to reducing the harm caused by alcohol,” Harris added.

The Irish effort may be a long shot, if the fate of a similar proposal in Canada is any indication, but industry officials are worried it could turn alcohol into the next tobacco.

“Having just one alcoholic drink per day increases your risk of having esophageal cancer, which is one of the deadliest cancers worldwide with an extremely poor survival rate” — Markus Peck-Radosavljevic, representative of the United European Gastroenterology

“Alcohol is not tobacco,” said Pierre-Olivier Bergeron, the secretary-general of the Brewers of Europe, a beer industry group. Bergeron, like others in the industry, argues that tobacco is inherently harmful even in small quantities, but the risks of alcohol are mainly associated with high levels of drinking.

Public health advocates disagree, pointing to studies like the 2007 WHO International Agency for Research on Cancer that found that people who consume 50 or more grams of alcohol per day (approximately 3.5 or more drinks per day) have at least a two to three times greater risk of developing head and neck cancer than non-drinkers.

The Million Women Study in the United Kingdom (which included more than 28,000 women with breast cancer) published in 2009 estimates that every 10 grams of alcohol consumed per day is associated with a 12 percent increase in the risk of breast cancer.

“Having just one alcoholic drink per day increases your risk of having esophageal cancer, which is one of the deadliest cancers worldwide with an extremely poor survival rate,” said Markus Peck-Radosavljevic, a doctor and representative of United European Gastroenterology, a medical association.

And yet, surveys indicate that few Europeans know about the increased risk from drinking alcohol. A 2017 report commissioned by United European Gastroenterology found that nine out of 10 people don’t know that several types of digestive cancer are linked to alcohol consumption.

“The alcohol industry is in a bizarre position where it’s not required to provide health warnings like tobacco or nutritional information like food,” said Ed Morrow, external affairs manager at the U.K. charity Royal Society for Public Health. “They got away lightly from this perspective, and we’d like to see that loophole closed because consumers are being left in the dark about the effects of alcohol.”

A spokesperson for the Irish Department of Health said the health warnings would provide the government a “unique opportunity” to inform consumers of the link between alcohol and cancer.

Advertisements would also have to display the cautionary phrase.

The bill is passing through the Dáil, or the lower house, where it is waiting to be referred to a special committee. It will then head back to the upper chamber for final approval.

And yet, in the land of Guinness and Jameson Irish Whiskey, the idea of putting the word cancer on booze is proving to be a massive political dividing line. The main opposition party Fianna Fáil backs the bill, but the proposed measure has split the ruling Fine Gael party over the expected heavy cost burden on businesses, specifically retailers.

While broadly welcoming the idea of restrictions, Bobby Aylward, a Fianna Fáil lawmaker from Carlow-Kilkenny said that he had a deep concern about using the cancer threat.

“Putting it simply, it is a matter of industry lobbying” — Mariann Skar, secretary-general of the European Alcohol Policy Alliance

“The word ‘cancer’ is a very serious one,” Aylward said during a debate in parliament. “It is a very serious word to put on a bottle. I am a survivor of cancer myself. Putting the word ‘cancer’ on something that is a luxury that can be abused but which is not abused by 90 percent of the population is very serious, and we need to think long and hard before we put it on a bottle.” He added it could hurt the country’s alcohol exports.

With tobacco, health warnings seem to be working. According to the World Health Organization, the number of smokers in the U.K. decreased from 26 percent of adults in 2002 to 18.3 percent in 2014. Spain registered a similar drop, with smokers falling from 33.2 percent of the population to 25.4 percent in 2014. France has bucked the trend, with smoking levels stable despite plain tobacco packs and ugly health warnings.

With alcohol, regulators have been more restrained. A European Commission study found that just one in five alcohol bottles in the EU include health-related warnings on packaging.

And those labels aren’t exactly scary.

France’s only mandatory label is a pregnant woman struck out with a red line, a symbol widely used voluntarily across the EU. Britain’s voluntary labels advise drinkers to “Know Your Limits.” The French nudge consumers to drink “avec modération.” Slovenes emphasize that “excessive drinking of alcohol harms your health.”

“Putting it simply, it is a matter of industry lobbying,” said Mariann Skar, secretary-general of the European Alcohol Policy Alliance, a health advocacy group. “We have just seen that the wine industry does not even want to provide calories on the bottles, not to mention ingredients and all nutritional information. Can you imagine them putting a health warning that their product might cause cancer?”

Christopher Snowdon, head of lifestyle economics at the U.K.’s Institute of Economic Affairs think tank, argued that health warnings are hardly the best option to raise public awareness to the adverse effect of binge drinking. He preferred alternatives like educational campaigns. 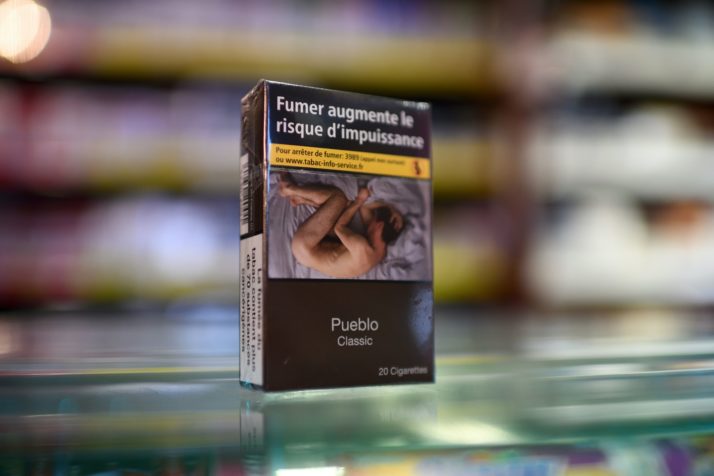 “The public health lobby has billions of euros to spend. If people are still ignorant about the risk of drinking, I think the blame has to lie partly with them,” he said. “If they spent less time lobbying for labels they could actually inform the public.”

If the Irish proposal becomes reality, it’s unclear whether the European Commission could intervene, as it has been pressured to do in other instances of innovative labels, such as France or Britain’s nutrition labels for food.

Ireland likely faces an uphill battle regardless of what the Commission could do, as the powerful liquor industry mobilizes against the proposed measures.

A worrying test case for the Irish played out in recent months in the Canada’s northerly Yukon territory, where authorities launched a pioneering trial of cancer warnings on liquor.

In November, the Yukon launched trial cancer warnings to see if they could help reduce the highest alcohol consumption levels in Canada. But industry quickly rallied against the experiment, saying the government had no right to alter liquor labels with stickers warning of breast and colon cancer.

“It was not the Yukon alcohol industry specifically that was against the cancer label,” he said. “The … study was paused to hear concerns from the national alcohol beverage brand owners with respect to labeling generally and the label with cancer messaging specifically.”

This article is part of a special report on alcohol labeling, Message on a Bottle.

Share on FacebookShare on TwitterShare on PinterestShare on LinkedIn Share on TumblrShare on RedditShare on VKontakte
adminMarch 26, 2018