Since its creation in 2015, Europes military operation in the Mediterranean — named “Operation Sophia” — has saved some 49,000 people from the sea. But that was never really the main objective.

The goal of the operation — which at its peak involved over a dozen sea and air assets from 27 EU countries, including ships, airplanes, drones and submarines — was to disrupt people-smuggling networks off the coast of Libya and, by extension, stem the tide of people crossing the sea to Europe.

European leaders have hailed the operation as a successful joint effort to address the migration crisis that rocked the bloc starting in 2015, when a spike in arrivals overwhelmed border countries like Greece and Italy and sparked a political fight over who would be responsible for the new arrivals.

But a collection of leaked documents from the European External Action Service, the blocs foreign policy arm, obtained by POLITICO, paint a different picture.

In internal memos, the operations leaders admit Sophias success has been limited by its own mandate — it can only operate in international waters, not in Libyan waters or on land, where smuggling networks operate — and it is underfunded, understaffed and underequipped.

The confidential reports also show the EU is aware that a number of its policies have made the sea crossing more dangerous for migrants, and that it nonetheless chose to continue to pursue those strategies. Officials acknowledge internally that some members of the Libyan coast guard that the EU funds, equips and trains are collaborating with smuggling networks.

For the operations critics, the EUs willingness to turn a blind eye to these shortcomings — as well as serious human rights abuses by the Libyan coast guard and in the countrys migrant detention centers — are symptomatic of what critics call the blocs incoherent approach to managing migration and its desire to outsource the problem to non-EU countries.

“Sophia is a military operation with a very political agenda,” said Barbara Spinelli, an Italian MEP and member of the Committee on Civil Liberties, Justice and Home Affairs in the European Parliament. “It has become an instrument of refoulement, legitimizing militias with criminal records, dressed up as coast guards.”

Now the operation, which is managed by Italy and has been dogged by political disagreements since it began, is coming under increasing pressure as the deadline for its renewal approaches in March.

Italys deputy prime minister, far-right leader Matteo Salvini, has said the operation should only be extended if there are new provisions to resettle rescued people across the bloc. Last month, Germany announced it would be discontinuing its participation in the program, claiming that Italys refusal to allow rescued migrants to disembark is undermining the mission.

Named after a baby girl born on an EU rescue ship, Sophia is the uneasy compromise to resolve a deep split across the bloc: between those who pushed for proactive search-and-rescue efforts to save more lives and those who favored pulling resources from the sea to make the crossing more dangerous.

The naval operation sits uncomfortably between the two, rescuing migrants in distress at sea, but insisting its primary focus is to fight smugglers off the coast of Libya. The two activities are frequently in conflict.

The operation has cycled through a number of strategies since its launch: a campaign to destroy boats used by smugglers; law-enforcement interviews with those rescued at sea; extensive aerial surveillance; and training and funding a newly consolidated Libyan coast guard.

But the success of these approaches is highly disputed, and in some cases they have put migrants lives at greater risk.

The EUs policy of destroying the wooden boats used by smugglers to avoid them being reused, for example, has indeed disrupted the Libyan smuggling business, but at a substantial human cost.

As Libyan smugglers lost their wooden boats, many started to rely more heavily on smaller, cheaper rubber boats. The boats, which smugglers often overfill to maximize profit, are not as safe as the wooden vessels and less likely to reach European shores. Instead, Libyan smugglers started to abandon migrants in international waters, leaving them to be pulled out of peril by European rescue ships. 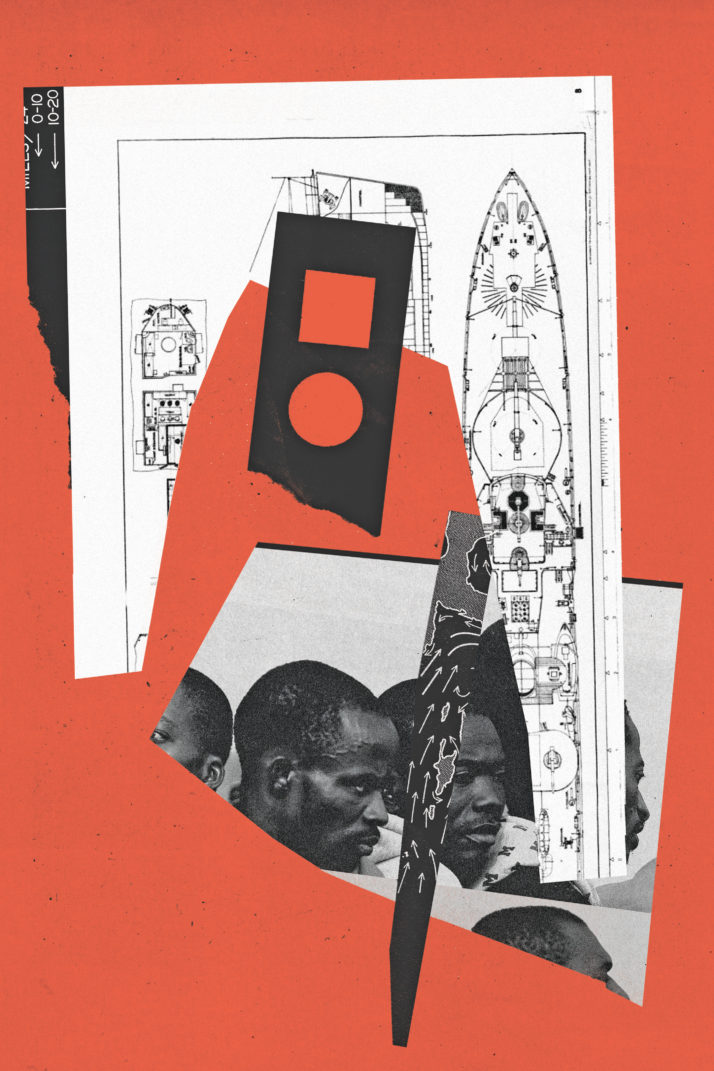 Illustration by Mike McQuade for POLITICO

Sophia officials tracked the situation and were aware of the increased risk to migrants as a result of the policy. “Smugglers can no longer recover smuggling vessels on the high seas, effectively rendering them a less economic option for the smuggling business and thereby hampering it,” they wrote in a 2016 status report seen by POLITICO.

The report acknowledged however that the policy has pushed migrants into using rubber boats, putting them in greater danger. “Effectively, with the limited supply and the degree of overloading, the migrant vessels are [distress] cases from the moment they launch,” it said.

These overfilled rubber boats, which officials described as shipwrecks waiting to happen, also present a problem for the EU operation.

International maritime law compels vessels to respond to people in distress at sea and bring the rescued to a nearby safe port. And because European courts have held that Libya has no safe port, that means bringing migrants found at sea to Europe — in most cases, Italy.

This has exacerbated political tensions in the country, where far-right leader Salvini has responded to the influx of new arrivals by closing ports to NGO and humanitarian ships carrying migrants and threatening to bar Sophia vessels from docking. 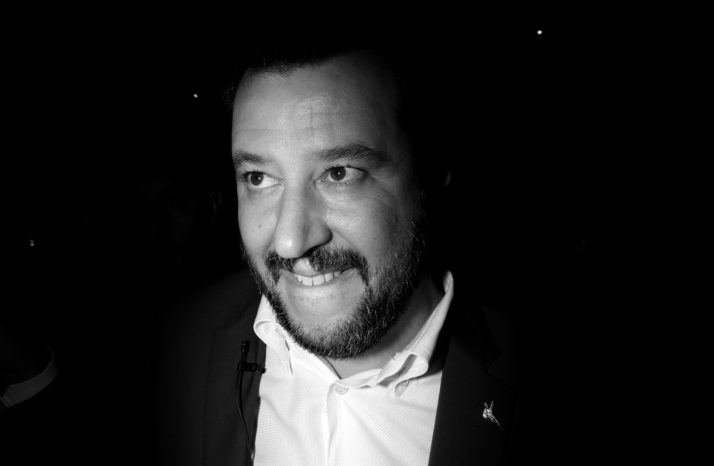 In a leaked status report from 2017, Sophia officials made a highly unusual suggestion: that the operation be granted permission to suspend its rescue responsibilities in order to focus on its anti-smuggling operations.

“Consideration should be given to an option that would allow the operation to be authorized for being temporarily exempt from search and rescue when actively conducting anti-smuggling operations against jackals in international waters,” the report read.

The EU has also wilfully ignored inconvenient aspects of its policies when it comes to its collaboration with Libyas municipal coast guard.

The intention of the strategy — launched one year into the Sophia operation — was to equip Libyan authorities to intercept migrant boats setting off from the Libyan coast and bring people back to shore. This saved Europe from sending its own ships close to coast, and meant that people could be brought back to Libya, rather than to Europe, as required by international maritime law — or more specifically, Italy.

Here too, the EU was aware it was pursuing a problematic strategy, as the Libyan coast guard has a well-documented relationship with Libyan smugglers.

A leaked report from Frontex, the EUs coast guard, noted in 2016: “As mentioned in previous reports, some members of Libyas local authorities are involved in smuggling activities.” The report cited interviews with recently rescued people who said they were smuggled by Libyans in uniform. It also noted that similar conclusions were reported multiple times by the Italian coast guard and Operation Sophia.

“Many of [the coast guard officers] were militia people — many of them fought with militias during the civil war” — Rabih Boualleg, Operation Sophia translator

In Sophias leaked status report from 2017, operation leaders noted that “migrant smuggling and human trafficking networks remain well ingrained” throughout the region and that smugglers routinely “pay off authorities” for passage to international waters.

“Many of [the coast guard officers] were militia people — many of them fought with militias during the civil war,” said Rabih Boualleg, who worked as a translator for Operation Sophia in late 2016 on board a Dutch ship involved in training the coast guard from Tripoli.

“They were telling me that many of them hadnt gotten their government salaries in eight months. They told me, jokingly, that they were forced to take money from smugglers sometimes.”

The coast guards talked openly about accepting money from smuggling networks in exchange for escorting rubber boats to international waters instead of turning them back toward the shore, Boualleg said. 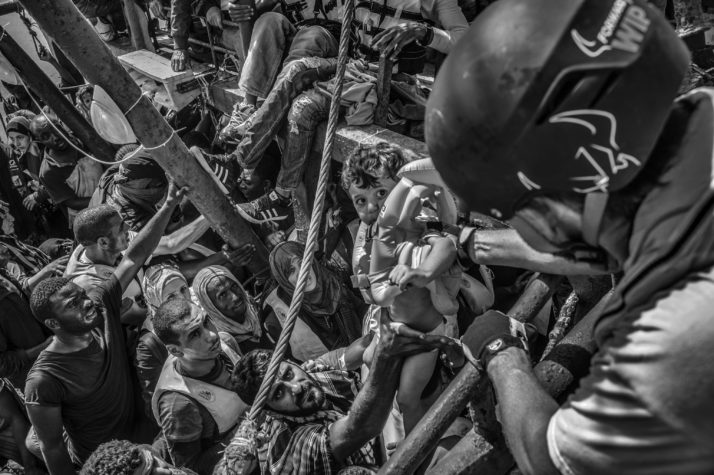 “If the [on-duty] coast guard came,” Boualleg added, “they would just say they were fishermen following the rubber boats, thats all.”

EU governments have, for the most part, simply looked the other way.

And thats unlikely to change, said a senior European official with close knowledge of Operation Sophia who spoke on condition of anonymity. For the first time since the start of the operation, Libyan authorities are returning more people to Libya than are arriving in Italy.

“If Italy decides — since it is the country in command of Operation Sophia — to stop it, it is up to Italy to make this decision” — Dimitris Avramopoulos, immigration commissioner

“Europe doesnt want to upset this balance,” the official said. “Any criticism of the coast guards could lead to resentment, to relaxing.”

Two years into the training program, leaked reports also show the Libyan coast guard was unable to manage search-and-rescue activities on its own. Sophia monitors their operations with GoPro cameras and through surveillance using ships, airplanes, drones and submarines.

The operation is limited by its mandate, but it has made progress in difficult circumstances, an EEAS spokesperson said. Operation Sophia officials did not respond to multiple interview requests and declined to answer questions via email.

“The provision of training the Libyan coast guard and navy, as well as continued engagement with them have proven to be the most effecting complementary tool to disrupt the activities of those involved in trafficking,” the EEAS spokesperson said in an email.

The spokesperson maintained that Libyan coast guards who are trained by Operation Sophia undergo a “thorough vetting procedure.” The spokespeRead More – Source

Share on FacebookShare on TwitterShare on PinterestShare on LinkedIn Share on TumblrShare on RedditShare on VKontakte
adminApril 23, 2019