BERLIN — Its just after noon on a bright weekday in Berlin and Martin Sonneborn is a little hungover. “Weve just held big campaign events here in Berlin,” he says between sips of orange juice and cappuccino.

Sonneborn, a German member of the European Parliament who is hoping to be elected for a second term, is not exactly your typical candidate. He doesnt so much want to reform the European Union, or join in the high-minded debates about blocs future, as much as he wants to point out the absurdities of the political system that underpins it.

Sonneborn, with his blue eyes and receding hairline, is the face of Die PARTEI, a satirical political party originally created to lampoon German politics that counts some 35,000 members in chapters across the country. He became its first MEP in 2014 almost by mistake — the result of a joke campaign.

Unaffiliated with any of the political coalitions that drive policymaking in the European Parliament, Sonneborns main activity as an elected member has been to make joke-filled speeches in front of a nearly empty plenary and post them on YouTube, where they have received millions of views. He is often photographed wearing the cheap gray suit and red tie that have become the partys official uniform, his hands clasped above his head in triumph.

From outside, Sonneborns campaign to keep his seat in the European election on May 26 — where his party is slated to win 2 percent of the vote in Germany — could very well be mistaken for the real thing.

Die PARTEI also picked up fans across the political spectrum in 2017 when it hacked dozens of Facebook groups affiliated with the far-right AfD.

Last month, Sonneborn held an American-style political rally at a Berlin theater, where he pledged to push for policies that would outlaw climate change denial and shrink Germanys gross domestic product by 50 percent. The sold-out event — the first stop on a three-week nationwide tour — drew some 800 supporters, who turned up carrying placards that read, “Better than Nothing” and “Enough for Europe.”

His campaign draws inspiration from other “successful joke politicians” from other countries, including U.S. President Donald Trump, Sonneborn says. “Politics is becoming so much more like satire nowadays, theres a need for making satire out of politics.”

Sonneborn did not expect to be elected when he ran the last time around. The party — founded 10 years earlier in the offices of the German satirical magazine Titanic, of which Sonneborn was editor in chief — had mostly played the role of political provocateur. It didnt consider itself electable.

Die PARTEIs name is a reference to the governing socialist party of former East Germany whose official anthem famously began with the line: “Die Partei hat immer recht,” or “The party is always right.” Its also an acronym of its purported platform: “Labor, Rule of Law, Animal Protection, Promotion of Elites and Grassroots Democratic Initiative” — a grab bag of political platitudes. 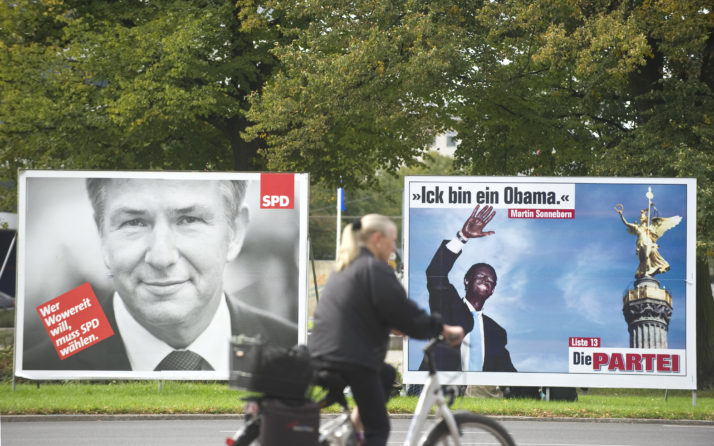 On the right, a poster of Sonnborn in blackface in 2011 | John MacDougall/AFP via Getty Images

Aside from running comedians as mock candidates for local and national elections, the partys main activities have focused on creating over-the-top campaign posters with slogans like “Merkel is stupid!” and “YES to Europe! NO to Europe!” During state-level elections in 2011, Die PARTEI caused a controversy with a billboard featuring a smiling Sonneborn in blackface under the slogan “Ick bin ein Obama.”

With a minimum vote threshold of 5 percent to enter the German Bundestag, Die PARTEIs typically fractional voter share has not been enough to give it any seats in the national government. But in Germany there is no threshold for representation in the European Parliament election, and so with just 0.63 percent of the vote, Die PARTEI and Sonneborn were able to claim one of Germanys 96 parliamentary seats.

Sonneborn spent his first term mostly under the radar but periodically caught the political spotlight.

To the extent that hes known in Germany, its as a former correspondent for the “Heute Show” on public broadcaster ZDF, a satirical news program modeled after “The Daily Show” in the U.S. In the self-serious tone of a fast-talking reporter, Sonneborns segments skewered people he considers to be crooked. Its a style hes carried into his speeches and stunts as an MEP.

In the plenary, he referred to Turkish President Recep Tayyip Erdoğan as “the madman of the Bosphorus,” called for Ireland to be kicked out of the EU for failing to collect higher taxes from Apple, and implied an indelicate relationship between French President Emmanuel Macrons wife and the 18th-century Enlightenment thinker Denis Diderot.

In one speech, Sonneborn told a nearly full room that he had requested to speak simply to block Udo Voigt, the representative of another tiny German party — the ultranationalist, far-right National Democratic Party — from getting time in plenary. The room responded with a round of applause.

The far right is one of Die PARTEIs favorite targets. In 2014, the party noticed the AfD was using a loophole in Germanys party financing rules: By selling gold coins and bars through its website at cost, the AfD was able to claim millions in matching public funding without actually raising any money. And yet, “it wasnt a scandal at all” in Germany, Sonneborn says. “So we tried to scandalize it.”

“The rise of the far right and the rise of satirical parties are all symptoms of deeper structural problems in our political system” — Julian Rappold, from the German Council on Foreign Relations

“There was a lot of interest,” Sonneborn says, smiling. “I said that if [the German government] would not change the party financing system by the next year, we would sell €200 notes by their weight in kilograms. And then the law got changed.”

Die PARTEI also picked up fans across the political spectrum in 2017 when it hacked dozens of Facebook groups affiliated with the far-right AfD and posted a video instructing the groups 180,000 members to face Mecca when making hate speech about Islam.

The party is currently developing an internet browser plug-in its calling an “AfD Blocker” that would block mentions of the far-right party on news websites. “They are on way too many talk shows, and they get way too much coverage,” Sonneborn says.

It might not keep the AfD out of the halls of power in Germany, he acknowledges, but it might attract those who oppose the far-right party to lend their support to his party. “The stupid people vote for AfD, and the more intelligent ones vote for Die PARTEI,” SonnebornRead More – Source

Share on FacebookShare on TwitterShare on PinterestShare on LinkedIn Share on TumblrShare on RedditShare on VKontakte
adminMay 30, 2019