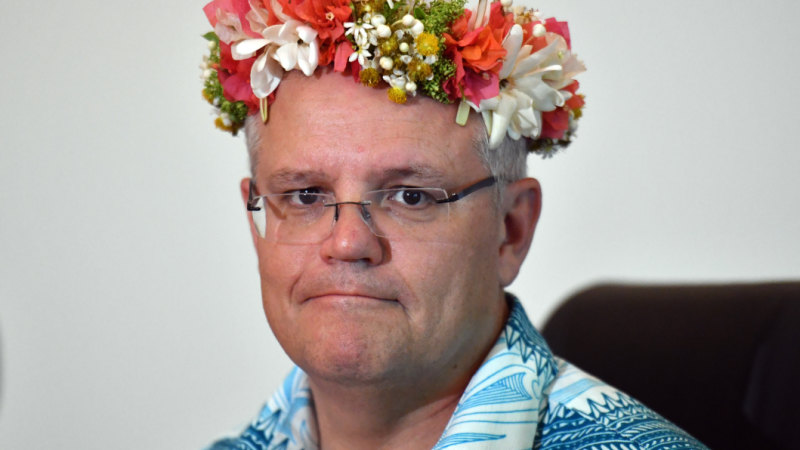 Prime Minister Scott Morrisons difficult week at the Pacific Islands Forum is only the first of many such diplomatic challenges Australia will face until it gets a comprehensive policy on climate change.

Mr Morrison went to the meeting of the 18 island states hoping to counterbalance the growing influence of China in a region that is Australias backyard but instead he spent much of his time fighting over climate change with countries he says are part of Australias “family”.

Pacific island leaders were not impressed by Mr Morrisons intransigence in fighting against the inclusion of calls for tougher action on climate change in the final communique.

There was a spat after New Zealand Prime Minister Jacinda Ardern said Mr Morrison had to “answer to the Pacific”. Broadcaster Alan Jones, as is all too often the case, launched a vicious attack on Ms Ardern for her remarks, although he later qualified his ugly call to put a sock down her throat.

The hardest kind of diplomacy is when you have to tell foreign governments one thing and say another for the domestic constituency back home. This is Mr Morrisons problem. He wants to show sympathy for the Pacific islands but at the same time has to manage the competing positions on coal within the federal Coalition.

Mr Morrison went dangling a $500 million package of re-purposed money that is supposed to help the Pacific states deal with climate change. But he gave no details and he failed to convince leaders he had taken their concerns to heart. On Friday, he repeated the coal lobbys line that “Australia alone cannot cool the planet”. It is a classic excuse to do nothing.

It would be wrong to over-dramatise the risk this diplomatic snafu poses to Mr Morrisons “step up” in the Pacific. The Pacific islands are not above using complaints about climate change to extract concessions in other areas. Moreover, the Pacific islands will continue to have close ties with Australia both in terms of foreign aid, trade and culture.

But our climate change policy is fundamentally out of step with the region and it will continue to be a vulnerability that gives China an advantage in the battle for hearts and minds. Chinas special envoy to the Pacific, Wang Xuefeng, addressed the forums leaders on Friday and described their demands as “legitimate”.

No doubt Australia will not be able to meet all the islanders demands to close down its thermal coal mining industry overnight but it can do much more.

The government should have a long-term plan to phase out domestic-coal fired power stations and prepare mining communities for a transition away from coal.

Australia should also immediately renounce the use of a transparent accounting trick that has made a mockery of our pledge to cut emissions under the Paris climate treaty. Australia pledged to cut emissions by 26 per cent below 2005 levels but the governments approach, which the Herald considers to be a sleight of hand, would reduce the reduction in emissions to only 14 per cent.

Unless the government comes up with a coherent and palatable approach, meetings such as the Pacific Islands Forum willRead More – Source

Share on FacebookShare on TwitterShare on PinterestShare on LinkedIn Share on TumblrShare on RedditShare on VKontakte
adminAugust 16, 2019