Shortly after NES Classic fever swept the United States in 2016, a series of underwhelming nostalgia systems followed, all designed to emulate classic games through modern TVs' HDMI ports. None of them, other than Nintendo's own SNES Classic, reached the same success or quality level. The C64 Mini was a half-baked bummer. The Neo-Geo Mini underwhelmed with a weird form factor and lacking controller. After a remarkably quiet launch, the PlayStation Classic eventually became a solid value… at roughly one-third of its original MSRP.

The ATGames Sega Genesis was arguably the most embarrassing of them all, as it did an utter disservice to its source 16-bit system. The audio, the video, the game selection—they were all trash. Every time we heard whispers that Sega might release another tiny Genesis, I involuntarily twitched, assuming the company's handlers meant a reskin of the ATGames disaster.

But, lo, the Sega Genesis Mini arrives this month and nails the basics we've wanted from so many other nostalgia boxes in the past few years. Eighty dollars gets you a diverse selection of 42 built-in games from the '90s, with a mix of obvious hits, cult classics, and weird outliers. That's all rounded out by two nicely molded controllers and an HDMI-connected system that delivers wholly competent emulation on both the sound and visual fronts. I can nitpick this thing plenty (keep scrolling), but as a straightforward holiday or gift list item, this is a pretty easy recommendation. It's exactly the value-packed '90s package that Sega needed to stand toe to toe with Nintendo's SNES Classic.

Something (missing) for everyone

Before diving into the technical details, we should settle the matter of the biggest sales proposition: the pre-installed games. Like other recent retro systems, the Genesis Mini is designed to only play what's already installed, not to download other games via Wi-Fi or memory cards. With a classic Nintendo system, that sales proposition tends to click more neatly. "Get an old Nintendo" means a guarantee of significant series and their biggest hits: every Super Mario, every Zelda, every Metroid, many Donkey Kong and Kirby games, and so on. 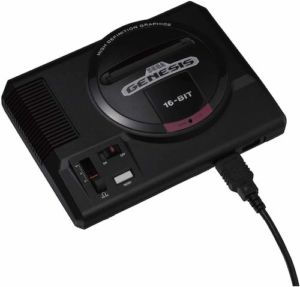 Buy Now (Ars Technica may earn compensation for sales from links on this post through affiliate programs.) What's the equivalent with a Sega Genesis? Sonic is the obvious entry (and he's here, mostly), but the rest of your must-have list might vary from the Genesis Mini's. Bombastic side-scrolling action games? The Genesis Mini says yes to classics like Gunstar Heroes, Earthworm Jim, and Contra: Hard Corps, but not Robocop Vs. The Terminator or Rocket Knight Adventures.

Quirky mascot adventures? The Genesis Mini has some really great ones, particularly the licensing mess of two Mickey Mouse games, but gems like Ristar and Cool Spot didn't make the cut. And you can absolutely forget about sports on the Sega Genesis Mini—easily the biggest omission on a platform saturated with the likes of Sports Talk Football, Sports Talk Baseball, NBA Jam, branded boxing hits, and the EA Sports onslaught of Madden, NBA, NHL, and FIFA.

Obviously, the era's biggest sports games would be a licensing nightmare (or would require a bottom-up hack to remove every real-life name), and licenses are easy to blame for other missing games. But the Sega Genesis was a behemoth for third-party games, and their relative absence on the Sega Genesis Mini cannot be understated. (For starters, listing every good EA game missing here, even outside EA Sports, could take forever. Ah, it's nice to remember EA's better days.)

Make your peace with this fact, especially if you like Sega's first-party Genesis output, and you're still in pretty good hands. A very good Street Fighter II port tops the SGM's third-party selection, while Earthworm Jim, Contra: Hard Corps, and Mega Man: The Wily Wars each represent different high points in the 16-bit side-scrolling pantheon.

MM:TWW is doubly interesting as a game previously trapped on the Sega Channel network. Sega and Capcom's effort to get this rare gem back into circulation in 2019 is admirable, and it, along with a few other rarities, might be the best reasons to buy this system. The SNES Classic came with only one such "previously unreleased" gem: its world premiere of Star Fox 2. The SGM has three more long-lost rarities on top of MM:TWW, in the form of Monster World 4 (whose English port is brand new), Darius (a fan-made homebrew port that was licensed by series handlers Taito for SGM inclusion), and Tetris (a Sega-made port of the puzzle classic that was shelved after a notorious Nintendo lawsuit).

Meanwhile, on the first-party front, I admit that it's easy to look at the above list and wish Sega had swapped a few choices. Why'd we get Golden Axe 1 instead of Golden Axe 2? Why not sneak Revenge of Shinobi in, arguably a better game than its Shinobi III sequel? If we're going to have the system's earliest arcade ports, why Space Harrier II instead of the more thrilling option of After Burner? Where the heck is Sonic 3? And couldn't one of the lesser included games have been dumped in favor of the phenomenal Herzog Zwei?

But that's all pretty moot. Nintendo charged the same $80 price for its Super Nintendo remake with only 21 games. You can easily pick through the above SGM list and pump your fist at half of the options.

What's more, don't worry about the set's T-for-Teen rating if you want to hand this system to a kid. A few games push the violence envelope: the bike-combat racing of Road Rash II, the orange-blood fighting weirdness of Eternal Champions, and a range of beat-'em-up and fighting games. But what pushed the T-for-Teen threshold of old seems genuinely quaint in a Fortnite world, and there's nothing comparable to Mortal Kombat here (since Eternal Champions' "fatalities" were already milquetoast in the '90s, let alone today).

With all of that said, the programmers at esteemed Japanese company M2 deserve all the kudos in the world for shepherding this system's emulation core. That's mostly because Genesis emulation has often been dogged by struggles to nail the original console's iconic Yamaha FM synthesis chip (which itself had multiple hardware revisions over the years). There's really not much to complain about with M2's implementation. The frequency treatment and lowpass filter are in the right range to make Streets of Rage 2's bangin' tunes sound just right. Music and sounds throughout the 42 games are more accurate across the board than even Nintendo's own emulation efforts, which themselves have suffered from surprising squeaks and imperfections.

But M2's work is not perfect, and the most obvious baggage attached to the Sega Genesis Mini is a sound emulation delay, to the tune of about three to four frames of animation between an on-screen action and its sound effect playing. This comes on top of another latency issue inherent with emulation. My tests of the Sega Genesis Mini next to the Analogue Mega Sg confirm that Sega's new system adds an extra three to four frames of delay between a button press and the action happening on-screen.

By themselves, neither issue is all that terrible, but they have a combined effect of making the constant "blooop" sound of Sonic jumping or "pew!" of Mega Man shooting a gun seem a little funny in action, when they don't quite sync up. But this is the only nitpick I have about the system's core emulation, and the resulting collection is thus so much easier to recommend than the Sega Genesis Classics collection sold on modern consoles and PCs. (In fact, M2 went and fixed at least one obnoxious issue with original Genesis hardware: the messy interpolation in Sonic 2's two-player mode. Now, it runs like a dream. Thanks, M2!)

Share on FacebookShare on TwitterShare on PinterestShare on LinkedIn Share on TumblrShare on RedditShare on VKontakte
adminSeptember 12, 2019

Real learning in a virtual classroom is difficult