HomeAmericaYale grad ended up homeless in LA. Then an alum made an unexpected offer
America

Yale grad ended up homeless in LA. Then an alum made an unexpected offer

Homeless for 10 years in the Koreatown section of Los Angeles, Pleasants had done little to extricate himself from a cycle of depression and methamphetamine use that began before he landed on the street. He depended on churches and other charities for free meals.I wrote about Pleasants, 52, in September, as part of CNN's coverage of the homeless crisis plaguing California. The notion of a high school valedictorian and Ivy Leaguer who'd built a successful career, then fallen precipitously, garnered a lot of attention. Millions clicked on the story and shared it on social media."I started reading it — and just tears," said Kim Hershman, who'd studied a year ahead of Pleasants at Yale. Though they were barely acquaintances back then, Hershman immediately felt obligated to help, especially after she learned Pleasants' encampment was mere miles from her home."When we were at Yale in the '80s, there were very few black students there," Hershman recalled. "Things are very different now. But I know that for whatever he achieved, something changed, and he didn't have the support that, maybe, I had." 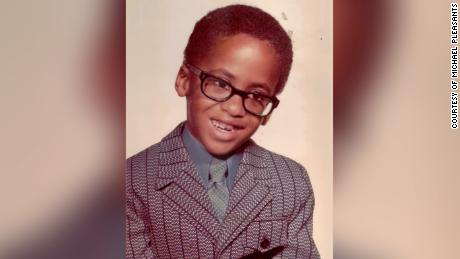 A Hollywood business affairs consultant, Hershman is also an attorney who graduated from Yale Law School as well. She drew upon her alumni network for guidance and encouragement, and a flood of postings soon appeared on a Facebook page for black Yale alums."If Kim wants to get something done, I'd better not stand in the way," one member wrote."Would he be willing to accept the offer of help?" queried another. There was only one way to find out. The day after my CNN story appeared online, Hershman made her way to Koreatown to try to find Pleasants amid the tent encampments."I was a little nervous because I was, like, 'Where am I going? I'm a 5-foot-1 female,'" she recalled, fearing that it may not be safe.Hershman — escorted by two Yale alums, including her significant other — began asking homeless people in the area if they knew where Pleasants camped out."Yeah," someone eventually told her. "He's around the corner."

She had a familiar face and a persuasive offer

Almost everyone in Shawn Pleasants' orbit was homeless, like him. Some people walking by were friendly ("When people say, 'Good morning,' it really makes a difference," he'd like others to know.) Others were indifferent or rude.So, when the woman wearing a Yale hat took a seat next to him on the sidewalk and grabbed his hand, Pleasants knew this was no ordinary visitor. Seeing the hat's "Y" logo, his mind raced back to the magical setting of Yale's campus in New Haven, Connecticut."I had seen her, maybe, seven or eight times at school," he recalled. Though they'd never been formally introduced, Pleasants knew who she was. But why had she come to see him today? he wondered. 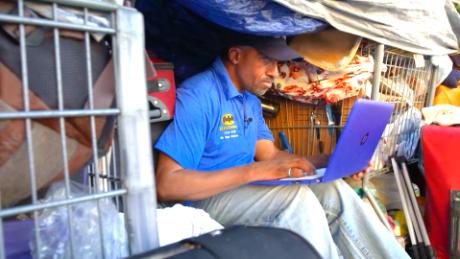 After a few minutes of small talk, Hershman had a simple yet extraordinarily complicated question for a man who'd been living on the streets for a decade."My big thing was: 'What do you want? And based on what you want, I'm going to do whatever I can to help you,'" she told CNN, recalling that initial conversation."I want to make a difference," Pleasants replied. "I'm in this situation, and there has to be a reason for it all, and I want to help others." 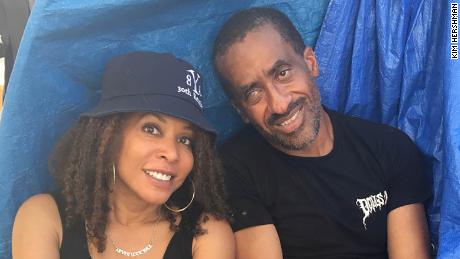 They talked about the possibilities. Pleasants explained his vision for a homeless resource center, where people living on the streets could take showers, receive mail, charge a phone or iron a shirt. A sort of one-stop shop to address some critical needs, he told her, was desperately needed.Hershman made no promises. But she did assure Pleasants that if he would accept her help, she would get him off the streets and help him regain his footing in life.But there was one catch, and it was nonnegotiable: He must agree to drug rehabilitation.Over the years, Pleasants had turned down similar offers from family. This time he said yes — but with a caveat of his own: "I have to bring my husband with me," he told Hershman, referring to his longtime partner, David, who had been living with Pleasants for years, even before they both became homeless. Hershman agreed."She's quite charismatic and a persuasive leader," Pleasants said. "And when she wants to do something, she does it, by golly. She's an angel." They set a moving date for a few weeks later. Still, Pleasants wasn't sure. 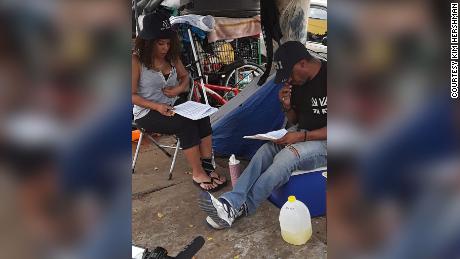 After a week, Hershman returned to check on Pleasants and to share a trove of supportive, encouraging messages that their Yale classmates had sent. He'd been "quite terrified that he had shamed his Yale family and biological family in doing the story," she said, referring to CNN's reporting. "To know that he had not, and had inspired people and touched people's hearts, meant the world to him," Hershman said via text. "The messages are really what made Shawn decide to move off the street."

A new life still feels like a fleeting fantasy

Pleasants' belongings consisted of a series of grocery carts overtopped with clothes, blankets and other disheveled items. Tarps connected to the carts formed a roof. A laundry basket held unopened boxes of cereal that he had gotten from a food pantry. His things seemed to take up half a block. But he left everything behind, aside from some clothes that he packed in garbage bags and luggage he had acquired on the street. Pleasants also kept a battery-operated candle that "would mentally warm" him up and a baseball bat he kept for protection. 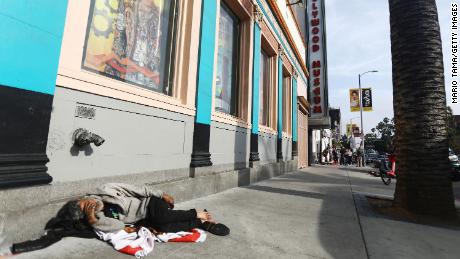 "Sometimes I had to clutch that bat because I didn't know what was going to happen," he said. "I had been stabbed in the back by someone I didn't even know. And my husband had been slashed with a machete by a total stranger in the night."As he prepared to say goodbye, Pleasants, his partner and Hershman, along with some other homeless residents, formed a circle to say a prayer."Let us not forget where we come from, what we've been through and where we're hopefully going," he said somberly to the group. Riding away, tears welling in his eyes, Pleasants said he was "nervous and happy." They had planned to stop at a McDonald's drive-thru but at the last minute decided to skip it, anxious to see what awaited them. Hershman had arranged for Pleasants and his partner to stay in a guest house in the back of a posh LA estate. It has a pool and a basketball court. It sits behind a gate and is entirely private. The guest house, more than big enough to accommodate two people, has its own kitchen that Hershman had stocked with all their favorite foods. Entering their new digs, the men went straight for the bathroom and spent several minutes hovering over a sink, washing their hands.Even weeks after leaving the streets, Pleasants was still acclimating. 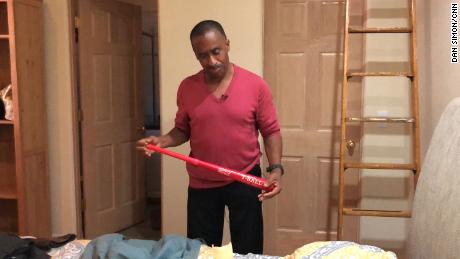 "At some point, someone is going to say, 'April Fools,' and it's over," he said.Pleasants has been addressing lingering medical problems, including with his vision. A congenital condition left him blind in one eye, and advanced glaucoma threatens the other. Meantime, David has been recuperating from heart surgery to address a genetic abnormality.Pleasants is also coming to terms with some earlier emotional trauma, including the death of his mother in 2010, which he said contributed to his downward spiral. 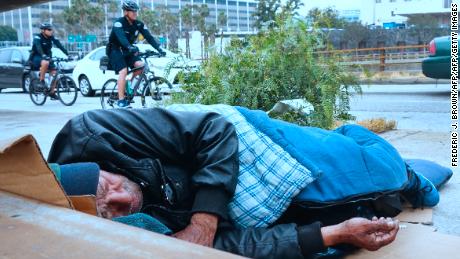 "You gotta show a strong face out there," he said, referring to his life on the streets. "But here, I can sit here and cry, and we can hug and just sort it out in 30 minutes."His drug abuse, however, remains a work in progress. Pleasants and David have left their compound a few times, and Hershman believes they may have been getting drugs.It's easy to tell, Hershman said, when he hasn't been using. "He seems flatter, more depressed," she said, adding that his addiction "is real — a crutch — and masks a lot of pRead More – Source

Share on FacebookShare on TwitterShare on PinterestShare on LinkedIn Share on TumblrShare on RedditShare on VKontakte
adminNovember 10, 2019