February 19, 2020
HomeAmericaA 6-year-old girl found a note at the store with a surprise tucked inside
America

Daphne was strolling with her mom through a Raley's Supermarket in Sacramento, when the routine trip turned into an unforgettable one.Daphne's mom, Danica, thought the random piece of paper her daughter found just laying on a shelf was someone's grocery list. But she quickly realized there was something else inside."It was a note that said, 'Whoever finds this, I love you,' with a hundred dollar bill," Danica told CNN of the exciting find. "I thought, 'Could this be a fake?' But I worked at a bank so I've seen counterfeits before and it looked real!" Daphne, just 6, didn't comprehend the amount of money she had just found."To her a penny is the same as a $100 bill," Danica said. "So I told her you found $100 and I told her that it was a lot of money." Danica admitted that she considered keeping it for herself — but ultimately let Daphne keep the money and use it for what she wanted.As many kids of that age would tell you, that could only mean one thing.Daphne took the $100 to the wonderful land of Build-a-Bear. 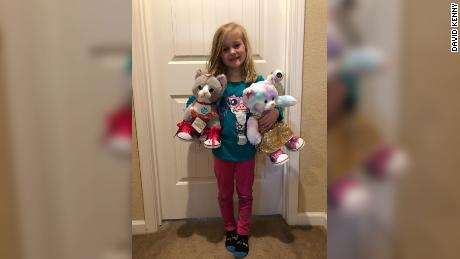 "She'd have more fun with it. I would have just put it tRead More – Source

Share on FacebookShare on TwitterShare on PinterestShare on LinkedIn Share on TumblrShare on RedditShare on VKontakte
adminFebruary 13, 2020