HomeAmericaFighting for social justice is in the WNBA’s DNA
America

Fighting for social justice is in the WNBA’s DNA

They've been especially outspoken lately, dedicating the season — which started in July — to Breonna Taylor and the Say Her Name campaign. New this season, they introduced a Social Justice Council of players and activists to push conversations around social issues forward. And this week, one team wore shirts with seven bullet holes in the back, a testament to the fate that befell Jacob Blake in Wisconsin. From LGBTQ rights to racial justice, WNBA players have been vocal for years, since the league's inaugural season in 1997."The women have been talking about these issues for a while," said Ashland Johnson, founder of the Inclusion Playbook, a sports justice project that aims to increase diversity, inclusion and social responsibility in sports. "And it took a guy to do something … for people to be, like, oh, athlete activism."

The WNBA has been doing this for years

Though Colin Kaepernick became the face of police brutality demonstrations in 2016, WNBA players actually began protesting before he did.Members of the Minnesota Lynx, then reigning WNBA champions, held a news conference before their game on July 9, 2016, to raise awareness of police violence after the killing of Philando Castile. They also wore shirts with the names of Alton Sterling and Castile on the back.At the news conference, Rebekkah Brunson, then a captain for the Lynx, spoke about the police shootings."What is happening now is not new. Racism and unjust phobic fear of Black males and disregard of Black females is very real. When we look at the facts, it's hard to deny there's a real problem in our society," said Brunson, now a coach for the Lynx. "If we take this time to see that this is a human issue, and speak out together, we can greatly decrease fear and create change."Their actions were powerful, so much so that four off-duty cops working the game that night walked off.As the season wore on, players across the league continued to protest. Entire teams knelt during the anthem. Players wore black warmup shirts to show their solidarity. They went on, undeterred, even when the league threatened to fine them.Elizabeth Williams, a player for the Atlanta Dream, was drafted into the league in 2015. She told CNN that it's easy to forget how unimaginable it was back then for athletes to say things like "Black Lives Matter" or to kneel, especially on national television."For us to do that in 2016 — to kneel, to walk out before the anthem before a Finals game — that level of activism was kind of unheard of in sports in 2016," Williams said.She continued, "We've been doing this work, regardless of how much visibility we've had." 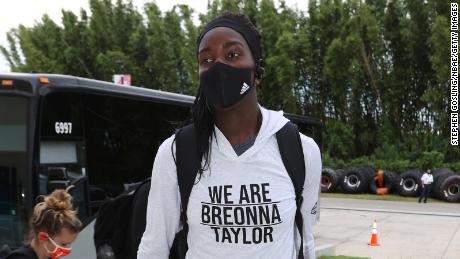 And they haven't stopped at racial justice. Many teams have also spoken out collectively for LGBTQ issues. After the Pulse nightclub shooting in Orlando in 2016, teams donated money to local funds and wore warm-up shirts in support of Orlando and the LGBTQ community. "(Their activism) very player generated. And it has been from the beginning. That's how they get to be so creative with the work that they've been doing," Johnson said. She pointed to the recent shirts worn by the Mystics, with the gun shots in the back. "That was provocative," she said. "It's creative, and I think it goes with their brand, where they know that sports are important for social justice."

Because the WNBA doesn't have the backing the NBA does, these players have more to lose by being so politically active and outspoken, said Errin Haines, editor-at-large of The 19th, which reports on gender, politics and policy.A player in the NBA can make tens of millions of dollars. Steph Curry of the Golden State Warriors is making over $40 million in salary this season alone.In the WNBA, though, the best stars make around $215,000 per season — less than some of the lowest-paid NBA players. "Somebody like LeBron James does not have to worry about his livelihood being threatened by his activism," Haines pointed out. "As opposed to, you know, a WNBA player who we already know was being paid significantly less, who may be marginalized for taking a stand around these issues, and whose career could frankly be threatened by speaking up around these issues."Without a WNBA season, the teams lose a significant amount of publicity and visibility, Johnson said. And yet, when NBA players announced their stop-in-play this week, the WNBA followed suit."Instead of just dropping the social justice thing, you can tell they're committed because they're still doing it," Johnson said.Take the Atlanta Dream, Williams' team. The owner of the team is US Sen. Kelly Loeffler, who has been outspoken against the BLM movement and the WNBA's activist work.Despite her position of power, Dream players have not only continued their social justice work, but have spoken out against her — starting a campaign encouraging Georgians to vote for her opponent Raphael Warnock, a Democrat running for her seat. 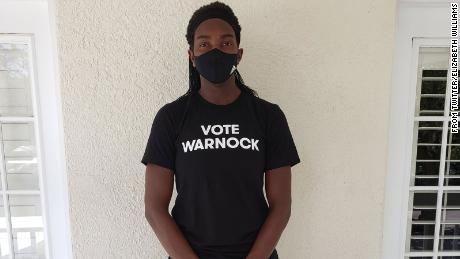 And still, players have chosen to forgo entire seasons to fight for social change — as the Mystics' Natasha Cloud did this season. Maya Moore, considered one of the greatest WNBA players right now, is currently sitting out for her second-straight season, choosing to instead focus on criminal justice reform. She has already helped one wrongfully-convicted man overturn his 50-year prison sentence.

Women athletes have a history of activism

Women, particularly Black women, across sports have long had to fight for justice. (In the 2019 season, the WNBA was 67% Black. More than 80% were people of color).Back before women were even getting paid to play tennis, Althea Gibson made history in the 1950s as the first African-American to compete in the US National Championships, the precursor to the US Open. She also desegregated Wimbledon, and won that tournament twice. Read More – Source

Share on FacebookShare on TwitterShare on PinterestShare on LinkedIn Share on TumblrShare on RedditShare on VKontakte
adminAugust 30, 2020