HomeAmericaNovak Djokovic is ‘in pain’ after US Open incident, says former coach
America

Novak Djokovic is ‘in pain’ after US Open incident, says former coach

That is the thought of his friend and former coach Radek Stepanek, and former world No. 1 Jim Courier. Stepanek isn't discounting a turnaround in the land of public opinion at some point when it comes to Djokovic, either, despite his rocky last few months. He has made an eye-catching pronouncement on vaccines, discussed the effects of emotions on water, organized the Adria Tour exhibition series in the Balkans that went badly wrong and, most recently, left the US Open in shame. There wouldn't have been as many players in recent history as strong a favorite to land a major than Djokovic in New York this year, given his dominance — unbeaten in 2020 — and the absence of his two biggest rivals, Roger Federer and Rafael Nadal. Djokovic, though, was defaulted Sunday when he hit a ball that inadvertently struck a line judge in the throat. Frustration got the better of the 17-time grand slam winner after missing three set points in the first against Pablo Carreno Busta, hurting his left shoulder in a fall and then getting broken to trail 5-6 in a frantic 10-minute spell.He later apologized on social media. READ: Barty will not defend her French Open title

'He is very sad inside'

Stepanek is a massive fan of Djokovic but he had no issue with the decision tournament officials made. The Czech, who coached Djokovic alongside Hall of Famer Andre Agassi for several months from 2017 to 2018, suspected the Serb was suffering. "I know he is very sad inside himself and he is in pain," Stepanek, a former world No. 8 and a Davis Cup hero for the Czech Republic, told CNN. "He is in pain because it was unintentional and, in that moment, the pain is bigger. "And it's hard for him because we know how hungry he is to become the player with the most grand slams. I believe he felt — everyone felt — this one should be for him, reachable. "All these circumstances make it very sad for him and in the first moment, empty, because I believe he himself knew that it was wrong that she got hit."Obviously the pressure on him and the criticism he is getting over time, it's hard. He's trying to do the best he can. He might be by the end of his career the greatest of all time. We are all human beings. We have a right to make a mistake." When it was pointed out to Stepanek that Djokovic might have made a few mistakes, he didn't disagree. "We create our own world and mistakes," said Stepanek, who irked an opponent or two during his career but was one of the most entertaining players of his generation. "We have to accept the outcome of it."For the time being, Stepanek said Djokovic is likely seeking refuge with those nearest and dearest to him. They would include his wife, Jelena, and their two young children."I think he's going to go back to his family and the closest ones to feel in the safe environment," said Stepanek. "Be with his loved ones. I think that one of his biggest strengths is his mental power. "No matter how sad and empty he is right now — and from what I know, it is very deep because he is a deep feeling person and he is sensitive — he is also hard on himself right now. I think the thing that gets him out of this will be getting back to work."
READ: 'He's going to be the bad guy the rest of his career,' says McEnroe of Djokovic 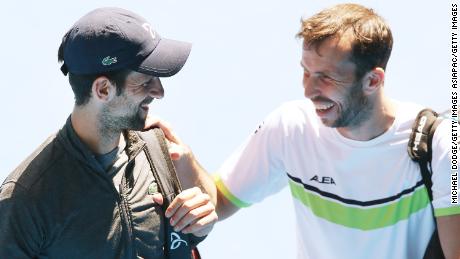 Djokovic is expected to return to action at the upcoming Italian Open in Rome before his appearance at the French Open, which was pushed back from its customary slot in late May to September 27 in Paris because of the pandemic. "He'll have a clay court event to focus on that starts in a week's time and he'll need to get ready for that, change surface from hard to the clay," Courier told CNN."That could be cathartic for him, to have something so quickly to be able to help him put behinRead More – Source

Share on FacebookShare on TwitterShare on PinterestShare on LinkedIn Share on TumblrShare on RedditShare on VKontakte
adminSeptember 9, 2020