A coalition of food-delivery companies on Wednesday unveiled a deal with a far-right-affiliated Italian union, pushing through their version of employee protection for gig workers as an alternative to classifying them as employees.

The companies, which include Uber, Deliveroo, Glovo, JustEat and others, believe their approach to labor relations — not directly employing delivery workers but providing them with a minimum wage and bonuses — will help avoid a 2019 law that could force them to grant more rights and benefits to delivery workers than they would like.

“This is an important step forward which shows that it is possible to increase the security of self-employed workers in the EU,” said Matteo Sarzana, the general manager of Deliveroo Italy and the president of Assodelivery, a lobby group representing delivery companies.

The agreement, seen by POLITICO, was signed between the coalition, named Assodelivery, and the General Union of Labor (UGL), which the companies hailed as the first between a union and the food delivery industry.

The agreement pushes for what Uber CEO Dara Khosrowshahi described as a “third way” for workers, whereby workers are classified as self-employed, but are provided with benefits like an hourly wage.

“This is going to be the first collective agreement that deprives workers of rights” — Valerio De Stefano, professor of labor law at the University of Leuven

“It validates flexible work, which is a key element, and what [delivery workers] are looking for. Secondly, it gives them more social rights, which companies like ourselves are willing to pay for,” Glovo Co-founder Sacha Michaud said in an interview.

A spokesperson for Uber called the deal “an important step forward for the industry.”

The agreement comes during the coronavirus pandemic, which exposed gig workers to high health risks and prompted lawmakers to call for stronger protections for precarious employment.

As a result, last year the government adopted a law that gives riders basic protections including sick leave and social security while still categorizing them as autonomous workers. Under the law, delivery companies have 12 months (which would end in November), to agree on a contract with workers representatives. If theres no agreement, the labor ministry would step in to set further conditions including an hourly wage.

The delivery companies hope their agreement with UGL — a right-leaning organization whose chief backed a far-right grouping in last years European Parliament election — will preclude the government from stepping in.

The agreement would grant workers a minimum €10 gross hourly wage, bonuses for working at night and in bad weather conditions, safety equipment and insurance for damages. The platforms also pledge to keep their ranking systems transparent, and to not punish couriers for not accepting jobs.

Who speaks for workers?

Italys other unions and critics think the companies are sidestepping their obligations.

“This is going to be the first collective agreement that deprives workers of rights,” said Valerio De Stefano, a professor of labor law at the University of Leuven.

De Stefano called it a “pirate” agreement, as it has been done with a smaller union which is not representative enough. “This doesnt bring legal certainty. If [Assodelivery] want it, they should negotiate with representative unions,” De Stefano said.

UGLs status as a representative union could decide if the agreement is legitimate. The law says “the comparatively most representative trade unions and employers organizations” can reach an agreement. While delivery companies believe UGL qualifies, the other unions dont. 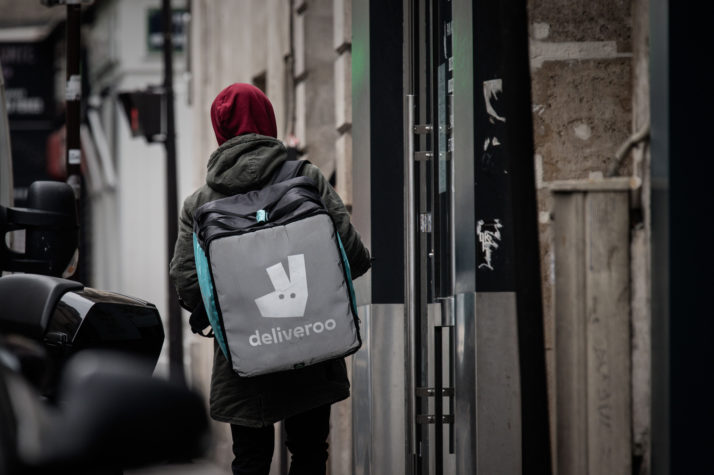 UGL is not one of Italys three big unions: the Italian General Confederation of Labour (CGIL), Italian Confederation of Workers Trade Unions (CISL) and Italian Union of Labour (UIL). None of the three have an agreement with delivery companies (though Di Maio tried and failed to broker one between CGIL, the largest, and Assodelivery).

UGL says it has 2 million members, but it is unclear how many are food delivery workers. The union did not respond to POLITICOs request for comment.

The union also has far-right affiliations that further isolate it from other unions and labor activists. UGLs predecessor CISNAL was close to Italys neofascist Italian Social Movement.

Today UGL has close ties to the far-right League party. Its former Deputy Secretary-General, Claudio Durigon, was a former deputy labor minister and member of the League, while its current Secretary-General, Paolo Capone, supported the party, which belongs to the far-right Identity and Democracy European Parliament group, in last years EU elections, pushing to strip Brussels of its competences.

The companies are not fazed by UGLs politics.

“I hope the facts are there. So at the end of the day, it can be right or left. But what weve agreed is a good starting point,” said Glovos Michaud. He added that UGL has been actively engaging with riders throughout the negotiations.

Share on FacebookShare on TwitterShare on PinterestShare on LinkedIn Share on TumblrShare on RedditShare on VKontakte
adminSeptember 17, 2020