There is still plenty of fire season left to go

The Glass Fire in Napa and Sonoma counties and the Zogg Fire in Shasta County are raging out of control in the northern part of the state since igniting on Sunday, bringing more distress to a fire season that has already produced five of the six largest wildfires in California's history. "It's been a long season, most of (the firefighters) been going since the middle of July, without rest from fire to fire to fire here in the northern part of the state," said Cal Fire Incident Commander Billy See.Residents, meanwhile, are feeling the strain of evacuating multiple times as fires spread through new and previously threatened territory, Sonoma County Sheriff Mark Essick said.More than 2,000 fire personnel are battling the Glass Fire, which has consumed 46,600 acres and destroyed at least 82 buildings. It is only 2% contained. The Zogg Fire is 0% contained and has torn through 50,102 acres. The fire has claimed the lives of three people, destroyed 146 structures and is threatening an additional 1,538.Teams are working on keeping the flames from advancing toward the city of Santa Rosa, See said Tuesday.The latest blazes began Sunday, fueled by little rain, high temperatures and strong winds. The National Weather Service has warned that the hot weather will continue, issuing a heat advisory Tuesday for the region, with temperatures possibly reaching 105 degrees in the hottest locations."We still have months to go for fire season," Cal Fire Unit Chief Shana Jones. "And that means that this could happen again. I pray to God, it does not, but we still have a lot of fire season to go."

All of Calistoga's roughly 5,000 residents were ordered to evacuate Monday from the city about 55 miles north of San Francisco, and more than 70,000 people have been ordered to evacuate in Sonoma and Napa counties.Glass Fire evacuee Jim Cunningham told CNN affiliate KPIX Monday that the scariest part is the uncertainty."You're standing in your driveway and looking at your house and you wonder if you're going to see it again," Cunningham said.James Lindquist of Calistoga told the station that evacuations in the area happen a couple times every summer — and it "feels like a beat down.""Look at it. How do you stop that?" he asked, pointing to the flames.One of three shelters for those fleeing the Glass Fire, the Sonoma Marin Fairground, reached capacity early Monday, CNN affiliate KGO reported. Sonoma Marin Fairgrounds CEO Allison Keaney said the fairground was transformed from a Covid-19 testing site to a shelter overnight, KGO reported.She said that about 160 evacuees from a senior living facility in Santa Rosa are temporarily staying inside several buildings spaced 8 feet apart.Not everyone is fleeing the fires.Ron Priest evacuated six weeks ago for nine days because of the LNU Complex Fire. Now, with a 500 gallon tank of water and a fire hose on his property, he told the station he is ignoring evacuation orders."Until I see fire, I'm gonna stay," he said. "People don't want to leave their homes if they can't get back and see what's going on. I don't wanna go, because I want to be here." 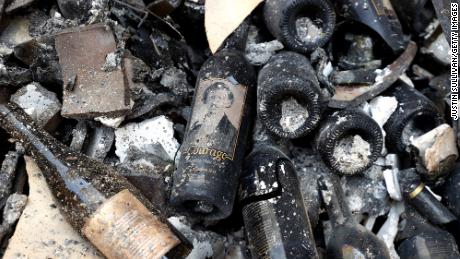 Vineyard steps in as firefighters are stretched thin

Just outside the Napa County city of St. Helena, the Glass Fire has destroyed a restaurant with three Michelin Guide stars.The Restaurant at Meadowood, was reduced to rubble despite firefighters' fierce efforts to quell the flames, including creating assembly lines of hoses and engines to take water from a swimming pool, KGO reported.North of St. Helena, the Glass Fire destroyed the famed 41-year-old Chateau Boswell Winery. Chateau Boswell is known as one of just a handful of priRead More – Source

Share on FacebookShare on TwitterShare on PinterestShare on LinkedIn Share on TumblrShare on RedditShare on VKontakte
adminSeptember 30, 2020