HomeAmericaThe Hummer is making a comeback — and this time, it’s all-electric
America

The Hummer is making a comeback — and this time, it’s all-electric

General Motors revealed the new all-electric GMC Hummer EV Tuesday night, officially bringing back the Hummer name after a decade. Hummer had been known for making large, rugged off-road capable SUVs and trucks that were often criticized for burning lots of gas. This Hummer pickup truck, however, will burn no gasoline at all. But engineering the vehicle to be electric didn't just give the Hummer'seco-bona fides a boost, however, according to Phil Brook, vice president of GMC marketing and advertising. It also helped improve both the on-road and off-road handling. 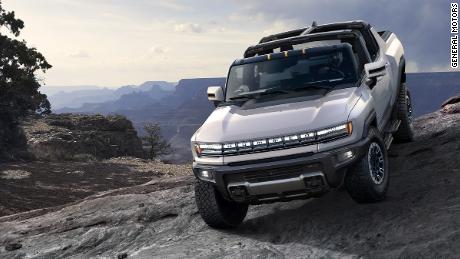 Another difference: Hummer is now a GMC model rather than its own separate brand. One thing the Hummer didn't lose ispower.Withfour-wheel drive and three electric motors capable of producing a total of 1,000 horsepower, the Hummer EV is designed to be "possibly, or probably, the most capable on the market," said Duncan Aldred, head of GM's Buick and GMC brands. Besides raw power, the GMC Hummer EV also offers some additional features and capabilities that aren't found on most trucks, said Aldred.A four-wheel steering systemallows it to be driven diagonally instead of just forward and backward, a maneuver that could make it easier to get in or out of some tight spaces. The truck will also be available with the latest version of GM's Super Cruise technology that enables hands-free driving on major highways. A special driving mode will enable the truck to accelerate from zero-to-60 miles per hour in about three seconds, according to GM. The truck will be able to drive more than 350 miles on a full charge, according to GM's testing.The Hummer EV's adjustable air suspension system features an Extract Mode that raises the truck by as much as six inches to make it easier to drive over obstacles or out of deep mud. Video cameras can provide up to 18 different views around and under the truck to help while driving around obstacles.The truck also has removable roof panels that can store in the truck's "frunk," or front trunk. The back window also rolls down to allow for a fully open air driving experience.The battery packs will be protected by steel plates to prevent damage during off-road driving.All of this will not come cheaply, though. Production will begin next fall with a special "Edition 1" version of the truck. Those first well-equippedpickup trucks will have a sticker price of $112,595. ShortlRead More – Source